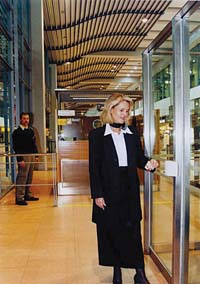 With the cost of smart cards continuing to come down, security, facility and operations managers all seek ways to use them in an efficient manner.

There are financial, identification, government and access control applications with multi-technology cards for physical access providing a reason to migrate to the smart cards.

But, according to some observers, the breakthrough from smart cards still awaits the killer application that justifies swapping out current readers to contact and contactless smart card readers.

According to the international research consultancy Frost & Sullivan, at present many businesses are unable to discern a clear business case for investment in a variety of smart card applications. This is attributed to the absence of killer applications that would provide significant return-on-investment for card issuers and benefit the end user.

As has been the case over the last decade, many successful smart card applications originate outside the United States. For instance, “model” multi-application undertakings, such as the Malaysian Government-initiated national identification project called MyKad, are expected to dispel such concerns. This 23 million-card project aims to equip that country’s citizens with a single microprocessor-based smart card.

Some hospitals and healthcare facilities in the United States also are embracing smart cards to speed up patient reception and security of files. Still other cards bridge the gap between proximity and smart cards; one example is the new smart badge for employees of the U.S. Patent and Trademark Office.

What’s really catching on, when it comes to smart cards, however, are uses tied to anti-terror applications. Germany’s Hamburg Airport, for example, has replaced magnetic stripe cards for employees with chip cards with contactless reader technology.

The point of the Frost & Sullivan research is clear: there are hundreds, if not thousands, of uses of smart cards with the big breaks waiting for the killer app.

The specific, more compact models are gradually underlining the business case for microprocessor cards and represent a positive development for hybrid and smart card reader uses. A key, defining trend in the market, says Frost & Sullivan research analyst Karthik Nagarajan, has been the convergence of card applications, especially in the chip card segment. The introduction of multi-application smart cards has enhanced the utility and value additions to the end user. While the access control segment benefits from cards used in both physical access control and network security, national ID projects are featuring multiple applications such as banking, telecommunications and healthcare.

On the hospital side, one giant breakthrough comes from Oklahoma where Beverly Hospital and Addison Gilbert Hospital patients are receiving medical smart cards as part of a program designed to make hospital registration faster and more efficient. With nearly 500,000 cards being distributed within the next year, they are probably the first private hospitals in the United States to issue smart cards to all patients.

“Our admissions process is easier and more convenient with patient smart cards,” says Cheryl Akre Teal, director of access services at Beverly and Addison Gilbert hospitals. “The access services staff can pull up the patient information instantaneously, eliminating the need for entering the record number manually. This greatly reduces the likelihood of errors such as duplicate records.”

Accidental creation of duplicate records is a major problem in healthcare computing. It can be caused by an errant keystroke in the data entry process, or when a patient or family member provides the wrong social security number. These errors are not only a time-consuming headache for medical records staff, but they can cause critical medical information to be hidden from treatment professionals. “With the smart card, we will decrease duplicate records and improve patient identification,” Teal says. The application also cuts down on healthcare fraud.

On the government side, the U.S. Patent and Trademark Office (USPTO) has 25,000 smart ID badges from Datakey of Minneapolis all equipped with contactless proximity technology for accessing USPTO facilities. When fully implemented, the badges will include the user’s photograph for identification purposes. Many of the badges are also embedded with a smart card chip based on cryptographic smart card technology enabling use within the USPTO’s planned security infrastructure upgrade.

The cards will be used by both USPTO employees to access the facility as well as by regular visitors to the USPTO building, such as patent lawyers, who need direct access to the various patent databases for research purposes.

A natural application, of course, centers on smart card use at airports.

The airport, with a far-flung area, has only a small part, that's freely accessible. But with 13,000 employees reporting for duty at the airport every 24-hour period, security is a number one priority.

Northern Germany’s top gateway to Europe, the facility handles more than 150,000 takeoffs and landings per year and 42,000 passengers per day; therefore access to working areas for personnel must be constantly monitored to guarantee complete passenger safety.

With employees spread across the airport in a mix of different jobs, all of which are assigned different authorizations, a powerful, flexible and failure-proof access control system was needed. Existing magnetic stripe cards were replaced with LEGIC chip cards with contactless reader technology. Numerous individual access rights have been defined and loaded on the cards. Each card also features a passport type photograph of the holder as an added security measure.

A total of 78 contactless reader terminals are at various access points throughout the airport. Approximately 10,000 employees received computer-readable badges, while the system is designed for a total of 20,000 master records, making it adaptable enough to handle future growth.

Dieter Bode, head of security at Hamburg Airport, stresses the flexibility of the system. Around 2,000 employees already use their chip cards for parking access as well as an ID badge. Further functions, such as canteen and automatic fuel pump use, will be incorporated onto the cards.