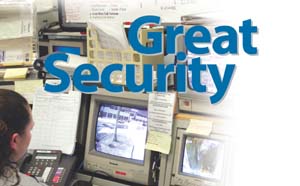 A contract security guard monitors surveillance on a security video network from the State of Michigan’s Department of Management and Budget central control office.
It’s a monumental security assignment. The government of the state of Michigan serves nearly 10 million people and operates a network of 42 major government buildings. Most of these are located in and around Lansing’s central capitol complex, with five other major buildings in the Michigan cities of Jackson, Grand Rapids, Saginaw, Flint and Traverse City. The state also runs a sixth building in Escanaba, Mich., located in the Upper Peninsula, which is currently experiencing a complete renovation. The facilities sit on 600 acres of grounds and encompass 6 million square feet of office space, warehousing and government buildings.

Don Starkweather of the State of Michigan’s Department of Management and Budget uses a proximity card reader, integrated with an automatic door opener at the Von Wagoner Building.

Burdened, like most of today’s state governments, with tight budgets, Michigan’s facility managers face several challenges. They need to optimize operational efficiencies with integrated systems that tie-in the old with the new; demonstrate that investments in technology deliver benefits to citizens, employees and agencies; and in a post-Sept. 11 world, adhere to a security strategy that shifts the focus from open to controlled access.

With neither the time nor resources to completely replace critical systems, the state depends on technology solutions that enabled managers to leverage existing investments with integrated systems that tie-in all of its building operations. “In the controls industry everything has been proprietary to manufacturers,” said Michigan’s manager of technical operations, Ron Luce. “We do have several different control systems and we want the ability to centrally monitor all our systems.” Luce added that his administrators also needed a system that is simple to use and manage.

The Department of Management and Budget’s central control office uses Honeywell’s Enterprise Buildings Integrator (EBI), applications that integrate building automation, security, life safety, digital video and asset location systems.
In the area of security, ensuring the safety and wellbeing of building occupants, employees and citizens is a top priority for Michigan. The state’s director of tenant services, Joe Ostrowski, said the biggest challenge to increasing security in public buildings is changing mindsets. “Before 9/11 you had everything open and accessible so you had anyone at anytime being able to walk into a building,” he said. “We’re here to serve the public, but addressing heightened security concerns has its tradeoffs.”

The state has guards posted at all critical points of entry – a costly business practice that Ostrowski wants to eliminate with technology. The state also wants to use technology to secure entire perimeters of buildings against unauthorized entry.

Since the early 1970s, the state has continually evolved to the latest technology while preserving its infrastructure investments. Its 35-year partnership with Honeywell is a major player in making that possible. “At that time Honeywell was one of the leaders in the control industry and still is,” said Luce. “There’s only one or two top control companies out there, and we really think Honeywell is one of the best if not the best.”

From the pneumatic controls in the early days, through various generations of Delta installs, to installation of the company’s Enterprise Buildings Integrator (EBI) in 1999, the state is migrating to a fully integrated, comprehensive facility management system that keeps the value in its existing equipment and optimizes performance and cost. “They worked with us well; if we had a problem they were always there,” said Luce. “Even today they try to solve the problem no matter what it is; sometimes it’s not even their problem.”

Don Starkweather of the Department of Management and Budget uses a photo ID station through the system’s Enterprise Buildings Integrator (EBI).
safety functions, facility managers have said the security applications are extremely valuable and timely. “Even before 9/11 we were working with Honeywell to implement card access systems,” said George Lites, the state’s building trades supervisor. In an effort to eliminate as many keys as possible, the state started out five years ago with one small system with six readers. “We wanted a system we could expand and Honeywell met all the criteria we were looking for,” said Lites. “Today we have more than 80 panels in place.”

In addition to advanced access control, security managers are in the early stages of implementing the company’s Digital Video Manager (DVM), which integrates video with fire, automation and various security sub-systems such as access control and intrusion detection. The goal is to eventually install cameras in all its buildings. Through integration and automation, EBI will enable operators to manage what could be a mind-numbing proliferation of cameras and monitors.

Above, a parking officer uses advanced digital security video to survey parking lots around the Michigan State Capitol complex. Left, Joe Ostrowski uses a proximity card reader at the Mason Building. To date, nearly 35,000 employees have been equipped with access cards that also serve as the state’s ID cards. “Our strategy is to eliminate the guards where we can and use the technology,” he says.

When the state of Michigan set up EBI in 1999, it represented one of the earliest installations of the system in the country. Since that time, the company has worked with the state on more than 200 projects worth about $15 million. “This is the best example of a customer that we’ve migrated,” says Bruce Rediske, Honeywell account executive. “From Delta 1000 installed in the 1970s to EBI today, we found ways of not leaving them behind with legacy systems.”

Luce, who has been with the state for 31 years, has experienced each round of system upgrades. He said they still have some Delta 1000s in their secondary complex. He also noted that the company’s ability to bring each legacy system forward without interruption is why the partnership endures today. “We had to be strong partners to make these kinds of transitions possible,” said Luce, who added that the reliability of the system and ability to obtain service are other key factors that continue to drive the partnership today.

While some of the state’s buildings don’t have any automation control at all, most of them are networked through a distributed server architecture, which allows its multiple EBI systems to operate as one. Using the state’s basic IT network infrastructure for communication, managers maintain a continuous central control operation that monitors HVAC, life safety and security systems. Luce said it is fairly easy to use. “I can sit in the control room when someone’s had to leave and if I can do it anybody can. It’s primarily point-and-click with EBI’s graphic interface. You can go down to the equipment level; we have graphics that tell you what things are running, tells you what temperatures are, makes it very user friendly.”

Once all the buildings are tied together, state workers will be able to centrally monitor and manage all the facilities, allowing them to control the environment easier and respond to issues quicker.

Using advanced technology to control the environment is crucial to the state’s overall security strategy. To date, nearly 35,000 employees have been equipped with access cards that also serve as governmental ID cards. “Our strategy is to eliminate the guards where we can and use the technology,” said Ostrowski. In addition to the cost benefit, he noted that relying on technology can provide peace of mind because there is less room for human error. “You can hire the best guards in the world but you have a human element involved; with technology you have more objectivity, you either turn it on or off.”

While the card access system is quite established, the state is in the initial phase of consolidating it with its existing video security system on an integrated platform. The DVM system is already being used in the buildings’ parking structures to process people without card readers. Plans are in the works to expand DVM to the state’s critical alarms. Lites said the goal is to use card access and digital video monitoring to eventually secure entire perimeters. “We’re going to secure the perimeters because after hours we want to know who is coming and going,” he said. “We also want to cover our critical areas like our cash rooms, server rooms and bio labs. So if an incident triggers an alarm they can document exactly what took place.”

Implementing the latest technologies is helping the state government achieve its major goal: having an integrated facility management system that is reliable and simplifies building control. Beyond the increased operational efficiencies with the enhanced monitoring capabilities outlined above, the state also gains an informational benefit: access to real-time, enterprise-wide data to support management’s business decision-making processes.

Looking ahead, Michigan’s facility managers have a strategy that calls for even greater efficiencies and control. They are seeking an energy management plan that relies on Honeywell for metering and utility analysis, and a Web-based architecture central to the control system. Currently, operators use two primary workstations in the central control room for EBI with several secondary workstations in other locations and outstate buildings. As Luce explains, “Transitioning to Web-based will increase usage because then I can view operations from my desk rather than from the control room or one of the stations where there is EBI. We also want a distributed system where we can get control in the hands of the mechanics in the building.”

While the state continues to undergo a significant amount of renovation work in HVAC, fire and security, given the economic climate, Michigan has no plans for physical growth anytime soon. But Luce noted that the opportunity is always there. And when that time comes, he said, “It wouldn’t faze me a bit to expand and add on to our Honeywell system because they don’t abandon us with our legacy equipment. Seamless migration was one of the goals for our control system all along and they’ve helped make that happen.”