New study says opioid crisis is not over: Overdoses will spike in rural and urban areas

A Northwestern Medicine study finds that a fourth wave of the opioid crisis is already happening and will not discriminate between rural and suburban areas. Drug overdose deaths have reached a historical high and are devastating families and communities, and geography has historically played a role.

The study, titled “Geographic Trends in Opioid Overdoses in the US From 1999 to 2020,” examined geographic trends in opioid-involved overdose deaths between 1999 and 2020 to determine if geography played a key role in the three waves and theorized fourth wave of America’s opioid crisis, using data recorded in the Centers for Disease Control and Prevention’s WONDER database.

The study found that the U.S. had its highest escalation rate since the data was first collected. Near the end of the available data from 2020, overdose deaths in rural areas were escalating faster than in urban areas, according to the study. A visualization of the data shows that between 2019 and 2020, rates of opioid-involved overdose deaths converged while escalating for the first time across six types of rural and urban counties. 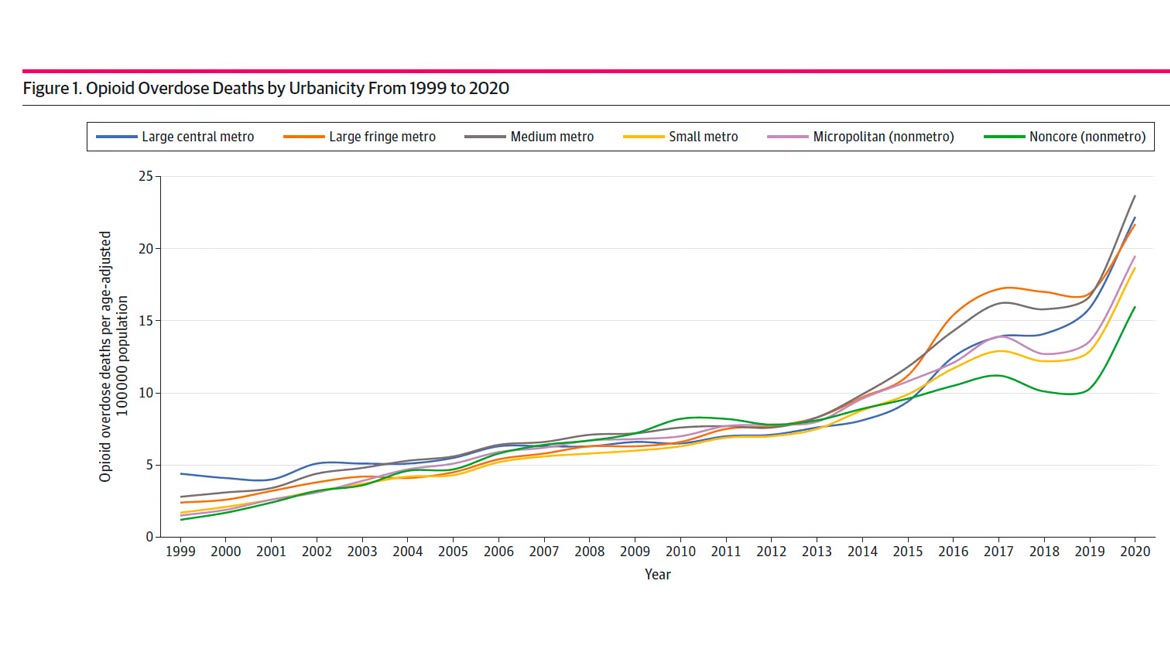 Overdose deaths have increased steadily in counties of every region size. Before 2010, opioid overdose (OOD) rates accelerated faster in rural counties than in urban counties; before 2000, overdose deaths were rare in rural communities, which lacked resources to treat opioid use disorders associated with prescription opioids.

Restrictions on synthetic and semisynthetic opioids aim to manage increased heroin use, which contributed to wave 2. OOD rates accelerated more quickly in urban counties during wave 2, beginning approximately in 2013.

From 2013 to 2019, OODs from fentanyl increased 12-fold. This third wave substantially impacted urban and rural counties. The COVID-19 pandemic coincided with a fourth wave marked by the worsening of the opioid crisis in all county types. 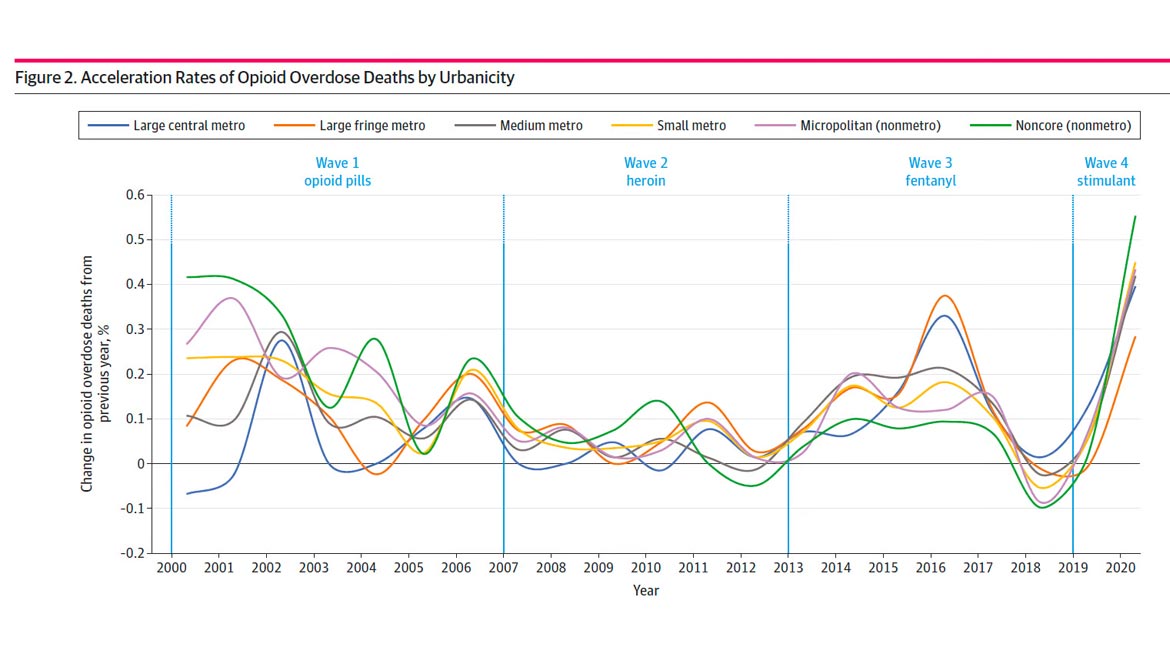 
After examining toxicology reports, the authors found that people are using fentanyl (a synthetic opioid that is 50 to 100 times more powerful than morphine) and carfentanil (a synthetic opioid approximately 100 times more potent than fentanyl) combined with methamphetamines and cocaine — which makes for a lethal cocktail that can even evade help from naloxone, an overdose-reversing drug.

“This fourth wave will be worse than it’s ever been before,” corresponding author Lori Post said. “It’s going to mean mass death.” Researchers say the fourth wave, complicated by the addition of stimulants and the COVID-19 pandemic, is already happening.

The results suggest that policymakers should consider socioeconomic and treatment needs of rural and urban communities as the opioid crisis evolves, mainly because urban outreach and treatment approaches may not work in rural areas.

One primary solution to the opioid crisis will be a focus on connecting individuals with opioid use disorder (OUD) to the medications that can treat them, according to subject matter experts (SMEs) that were brought together by the National Institute of Justice (NIJ) and the RAND Corporation to identify and prioritize approaches for responding to the opioid crisis.

To further address the opioid crisis, policymakers must pursue solutions that reduce barriers to medication-assisted treatment (MAT), such as buprenorphine and methadone, and expand access and funding for it, the SMEs said.

Connecting individuals with OUD to treatment will require effective collaboration among law enforcement officers, social workers and other stakeholders. In addition to removing legal barriers, community and other stakeholder concerns will need to be addressed before high-priority harm-reduction approaches, such as safe injection sites or syringe exchanges, can be implemented.