Disinformation campaigns against brands are flourishing across social media

By Maria Henriquez
Disinformation, long used to spread and advance political ideologies, is now being used to damage Western corporations and economies, as reported by the Network Contagion Research Institute (NCRI) study, The Future of Disinformation Operations and the Coming War on Brands. The actors and methods employed to influence elections and spread falsehoods to polarize the United States electorate are now being leveraged for economic warfare. Moreover, an economic disinformation industry is emerging in which disinformation services are provided to domestic and foreign threat actors – a trend that the NCRI expects to continue.

To showcase the increase in disinformation campaigns targeting corporations, the NCRI first sought to quantify the scale and structure of the makeup of information operations and conspiracy for 5G technology, which has been targeted by Russia and China, as a means to discredit western 5G technology and promote their own technologies.

NCRI also analyzed over 17 million Twitter posts mentioning 5G between July of 2018 and July 2021. Starting with the COVID-19 pandemic, tweets mentioning 5G have included terms like stop5g, 5gkills, soros, gates, cancer, coronavirus and others. These developments showcase the flexibility of movements enabled by disinformation against brands, according to the NCRI. 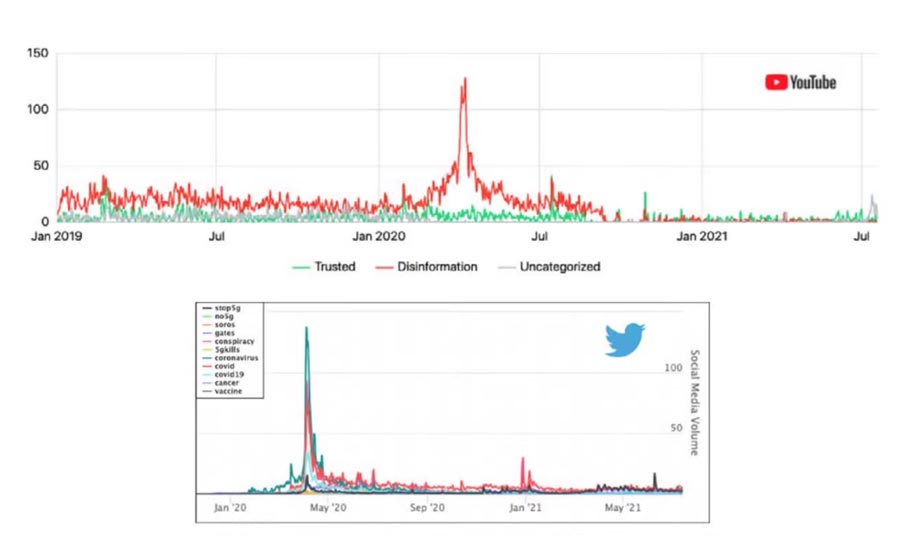 Figure 1 — A partial time series analysis of multiple YouTube videos (top) and hashtags tweeted per minute (bottom) mentioned with 5G. Conspiracy theories and disinformation around 5G appear to emerge in synchrony across platforms and show steep increases in response to the advent of the COVID-19 pandemic. Image courtesy of the NCRI

In this case, the onset of COVID-19 bolstered an unrelated, existing reservoir of disinformation around a technological dystopia, the NCRI found. In April and May of 2020, there were times when posts about 5G accompanied by these terms reached an average rate of 100 tweets per minute. Additionally, roughly 19,000 YouTube videos about 5G have accrued over 180 million views since January 1, 2019, and more than half of these videos amplified 5G conspiracy theories.

NCRI also examined anti-vaccination disinformation Russian campaigns that seek to degrade Western vaccine confidence and promote Russia’s Sputnik V vaccine. To gauge the information landscape related to American vaccines, NCRI identified over 4 million articles since January of 2020 mentioning American pharmaceutical companies involved in COVID-19 vaccine production (Moderna, Johnson & Johnson, and Pfizer). More than half a million are from known disinformation sources, and the content generated from known disinformation outlets generates the most engagement. NCRI also determined that sources connected to the Russian State (like Global Research and RT) and non-state actors have generated the most online articles on the topic, and those articles have been the most cited in other online articles.

To dissect how and when vaccine disinformation targeted specific brands in the social media sphere, NCRI collected over 8 million original tweets with the term “Pfizer” from early 2009 to July 2021 and analyzed the prevalence of conspiracy terms in conjunction with mentions of the word “Pfizer.” 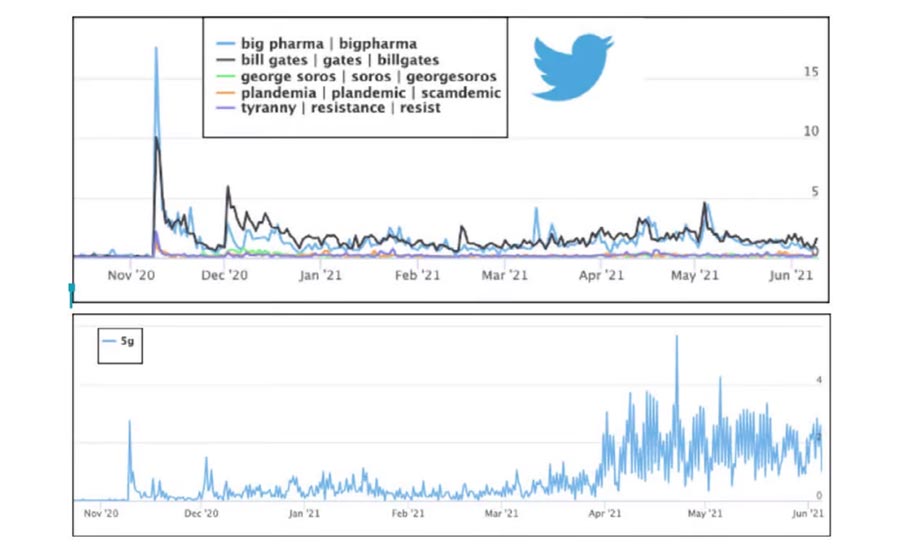 Figure 2 — An analysis of original tweets per minute with the term “Pfizer” combined with terms common to known COVID-19 disinformation narratives showed a substantial surge (up to 100 times per/minute) in putative conspiracy theory and disinformation. These surges occurred in tandem with ongoing election challenges in the United States and phase 3 clinical results for the vaccine. Bottom: 5G conspiracy chatter is increasing in connection to Pfizer and other vaccine brands on Twitter. Image courtesy of the NCRI

Interestingly, NCRI found substantial increases in the use of these terms during the contested election of 2020. The onset of a contested election, an unexpected source of a national political crisis, bolstered an unrelated, existing reservoir of disinformation against Pfizer and other vaccine brands. Finally, a notable trend in the gathered Pfizer data is an increased frequency of 5G comments (Figure 2, above).

Overall, the analysis shows how movements supported by disinformation operations can jointly impact multiple brands through unexpected combinations, the NCRI says. In fact, according to a recent Economist/YouGov poll, 1 in 5 Americans believe the U.S. government is using the COVID-19 vaccine to microchip the population. 5G is often a central theme in circulating vaccine microchip conspiracy theories.

NCRI researchers also examined disinformation in retail and the consumer economy at risk of targeted disinformation campaigns. In 2020, Wayfair, a furniture retailer, suffered negative publicity after a post on the r/conspiracy subreddit alleged that the company was at the center of a massive child trafficking ring. The conspiracy theory spread on social media channels such as Twitter, Facebook and TikTok.

The NCRI believes disinformation attacks will continue to proliferate, fueled by advances in artificial intelligence, deep fakes, progress in psychological profiling, and other combinations of technology and financial resources of sovereign nations.