This website requires certain cookies to work and uses other cookies to help you have the best experience. By visiting this website, certain cookies have already been set, which you may delete and block. By closing this message or continuing to use our site, you agree to the use of cookies. Visit our updated privacy and cookie policy to learn more.
Home » FEMA publishes loss prevention and natural disaster study: Building codes save lives
TechnologiesManagementPhysicalSecurity NewswireSecurity Enterprise ServicesSecurity Leadership and ManagementPhysical Security

First published in 2000, the I-Codes are updated every three years and incorporate specific hazard provisions that reduce damage resulting from floods, hurricanes, and earthquakes. Those natural hazards form the focus of the study, Building Codes Save.

The study’s hypothesis is that communities with significant hazard exposure that are proactive in adopting and enforcing the I-Codes realize associated financial benefits. To measure the benefits, FEMA developed, tested, and validated a method using a progressive phased approach. The fourth and final phase is to implement the methodology nationwide and calculate the Average Annualized Losses (AAL) associated with the adoption of multi-hazard resistant building codes. The findings are intended to inform and aid proactive risk-reduction planning and decision-making by community officials.

Main Takeaways From the Study

Of the 18.1 million post-2000 buildings that were modeled in the BCS Study, about 51% (9.1 million) showed losses avoided resulting from the adoption of I-Codes. The calculated AALA results (in 2020 dollars) were aggregated by occupancy to the county, state, and national levels for all three hazards.

Table ES-2 shows the AALA for I-Code (and similar code) modeled nationwide by hazard and a total of $1.6 billion AALA. These results confirm the BCS Study hypothesis both in national aggregate and in locally driven solutions. 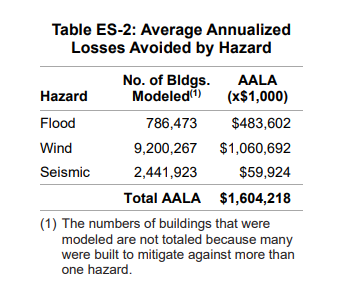 Although flooding is the most common hazard, the flood hazard has the lowest nationwide exposed post-2000 building count of the three hazards, because most construction avoids the floodplain. Hurricane wind exposure covering half of post-2000 construction also has large areas within the high hazard Wind-Borne Debris Region, producing the dominant AALA achievement to date and future opportunity.

The six western seismic states, which account for 78.5% of the national AAL, show a low I-Code AALA compared to hurricane wind and flood because code seismic provisions have been incrementally reducing damage since the 1980s and the incremental changes post-2000 that can currently be modeled are focused primarily on hazard map changes. In short, the six seismic states have been accruing losses avoided for a longer period with a lower percentage of buildings producing AALA—mainly locations of significant map changes. Delving further into rankings of AALA by state, the top four states are Florida, Texas, California, and South Carolina, accounting for 80% of the total $1.6 billion AALA with only 60% of the number of new buildings being hazard-prone states.

Projecting forward, based on an average of 577,000 new buildings per year, approximately 13.9 million buildings will be added to the U.S. inventory between 2016 and 2040. About 70% (approximately 9.7 million) will be built to I-Codes or similar codes. Based on the AALA results, the cumulative savings will be $132 billion. Further, if all buildings pre-I-Code were built to I-Code standards, the AALA would increase fivefold given they are currently 20% of the building inventory. A massive compounding effect emerges as a strong economic case for codes.

Findings can be used to inform policy, technical guidance, mitigation strategies, and advocacy to communities and stakeholders, such as:

Opportunities for code savings are abundant. Three top community priorities were identified by post-analytics of results:

In conclusion, the promising community savings revealed in the BCS Study, especially their massive compounding effects into the future, will hopefully prompt increased state and local code adoption. Reduced damage and increased community resilience by adoption of modern I-Codes is shown to be achievable by joint effort and commitment by communities at all levels of government.

To find out more, download a copy of the study.

Every $1 Spent on Natural Disaster Preparedness is $11 in Return