Extending the Reach of PoE Powered Devices: 100 meters is No Longer the Limit

Increased Challenges with an Expanded Network

As more organizations strive to integrate physical security, wireless connectivity and building automation systems with their overall IP network, new challenges arise. Chief among these challenges is how to provide both power and data connectivity to devices that need to be positioned in locations some distance from the network hardware.

Power over Ethernet provides a convenient and cost-effective approach to deliver both power and data connectivity over a single connection. However, this approach has traditionally been limited by the standard 100-meter reach of Ethernet over a twisted-pair cabling system. While optical fiber cabling provides significant reach capabilities for data transmission, local power has still been required, and has been both costly and inconvenient for providing local power to a single camera, wireless access point, or access control device. What has been needed is a system that combines the best aspects of optical fiber transmission reach and the convenience of Power over Ethernet.

There are options available today to address the challenge of supporting remote devices. Each option will be considered in this paper, which will also highlight the benefits to be realized from a system that extends the reach of PoE and PoE+ well beyond 100 meters with no need for local power, additional power back-ups or additional electrical contractors. The OneReach™ System will be considered as an example of a complete, simple, integrated solution to deliver just these benefits.

Power over Ethernet (PoE) was first standardized in 2003 with IEEE 802.3af, providing up to 15W of DC power with 12.95W minimum available to the powered device. The initial applications targeted for support were IP phones, wireless access points (WAP), and IP cameras. The ability to power IP devices proved to be very cost- effective. As years went by and advanced VoIP phones began to require more power, the IEEE ratified 802.3at in 2009, allowing up to 30W of DC power with 25.5W of power available to the powered device. In September 2018, 802.3bt was ratified, and Type III (60W) and Type IV (90W) of power were made available.

Eliminating the need for a separate power outlet provides a number of advantages:

The power supplied across the cable is nominally 48 VDC. Today, voltage is commonly supplied by the Ethernet switch. This configuration is known as an “end span” system, since the power is generated at the end of the cabling channel. However, for legacy switches that lack the capability of providing power, “mid-span” systems can inject the power along the cabling run. Mid-span power injection typically happens in the patch panel close to where the Ethernet switch resides, but it can be inserted anywhere along the link. Figure 1 illustrates the concepts. 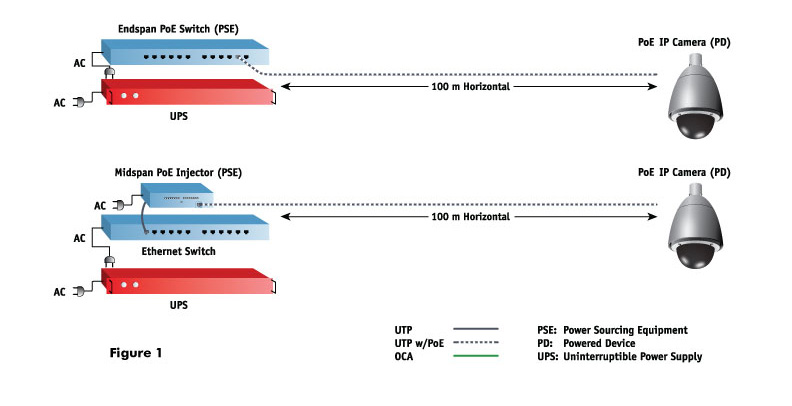 While PoE is clearly a successful technology, there are limiting factors. One of the most significant challenges with PoE technology is the physical reach. Since it is an Ethernet channel, the maximum distance is 100 m on a category cable. For many applications, this link length is sufficient. But for more and more devices, the traditional 100 m (328 ft) distance is insufficient. In fact, it has become a common occurrence to have an IP camera installed 400 feet away from the switch. The camera may power up if sufficient voltage reaches the camera, but the distance is too far for the data communication channel, therefore no video signal reaches the closet. It is important to note that the distance is measured by the cable length, which can be significantly longer than the straight line distance between the switch and the PD due to the twist of each conductor pairs.

When these situations are encountered, alternatives must be developed. One solution is to install an electrical outlet somewhere near the powered device, as illustrated in Figure 2. Once an electrical outlet is in place, various options are available. For example, another Ethernet switch could be installed which would be connected back to the main closet with an optical fiber backbone. Or, a traditional media converter could be used, again with a fiber connection back to the main switch.

In either of the examples in Figure 2, several sacrifices are made. The most significant is the cost of installing the electrical power. Depending on various factors, the cost of this installation can range from $2,000 to $10,000, or significantly more if the outlet needs to be installed in a difficult-to-reach location. In addition, since there is a new outlet, an additional UPS is needed to provide backup power. The cost of this UPS depends on the supportable load but is typically several hundred dollars. And these devices typically need to be housed in a closet to provide cooling and/or security. Therefore, the initial cost could be several thousand dollars or more. 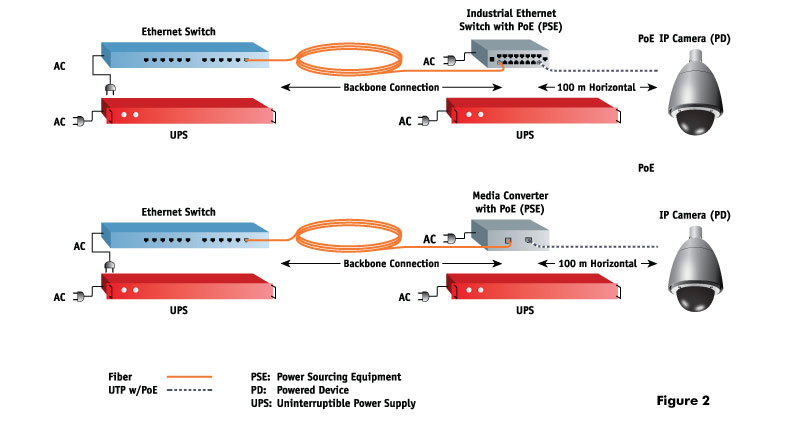 Berk-Tek developed a new solution to address these challenges – a cost-effective system that allows power and data to be delivered to PDs beyond 100 meters, yet still remains standards compliant. The initial development focused on designing a cable that could be used in the appropriate environment. Since many of the longer reach applications involved IP cameras that were installed outside of a building, the cable would need to operate in an indoor/outdoor environment. The solution is a riser-rated composite cable containing copper conductors for power and optical fibers for data was designed and listed as a Class 3 cable (or CL3). The resulting cable has both a Power Limited Tray Cable (PLTC) listing and a CL3R-OF listing, placing it in the low voltage category (as is Category 5e cable), which allows the traditional low voltage contractor to install the cable.

Media converters have been available for many years to convert a copper Ethernet signal to a fiber Ethernet signal, thereby extending the signal reach from 100 meters to 2 kilometers or more. For these traditional devices, the remote media converter (the one installed near the PD) still needed a local source of power. Therefore, the solution needed to address this shortcoming for the customer to be able to take full advantage of the benefits of PoE.

Since the remote converter would frequently be placed outside, it needed to meet industrial hardened specifications. These included withstanding temperatures as low as -40°C and having voltage isolation to withstand ground faults. All of this needed to be contained in a package compact enough to be housed in a small NEMA-rated enclosure.

The OneReach solution instead provides the power for the specially designed remote media converter and the PD from the main closet, eliminating the need for local AC power. The power is carried by the copper conductors. The conductors are #12 AWG and provide a low enough resistance that sufficient power can reach the media converter and PD at distances of up to 3,600 feet, depending on the current of PoE required by the PD. The Ethernet signal would be carried on the fiber where such distances are easily achieved. Both the copper and fiber components are provided in the riser-rated CL3R-OF/PLTC composite cable. In addition, Berk-Tek has also introduced a plenum option, the CL3P-OF/PLTC composite cable.

The OneReach System is an end-span PoE system, as illustrated in Figure 3. This proprietary system provides an IEEE compliant PoE port, but extends it well past the 100 meter limit—in fact it can exceed well beyond 1 km. No additional power source is needed outside of the main closet. And since OneReach is not a switch, the switch in the closet is communicating directly with the PD and can use the existing UPS for power backup.

The key benefit of the OneReach solution is its transparent nature. As long as the PD is compliant to the PoE specification, it can be supported by OneReach. Newer high performance PD’s are steadily being released that take advantage of PoE and PoE+.