Building a Better Hospital Security System, One Phase at a Time 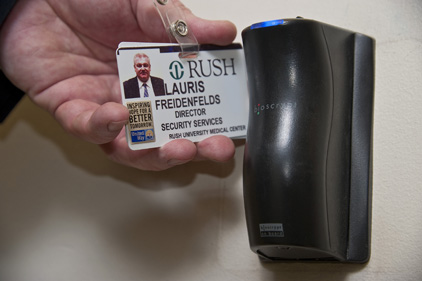 Rush University Medical Center in Chicago operates from a campus that spans four city blocks and 20 buildings, presenting some unique security challenges. At the same time, the security department recognized that its work plays a pivotal role relating to the hospital’s reputation as a leading and safe medical facility.

As part of the first phase of its upgrade, Rush University Medical Center turned to Software House C•CURE solutions from Tyco Security Products as the foundation for its enterprise access control system.

Convinced by the solid technology roadmap, Rush University Medical Center   began the migration of its access control system to the powerful C•CURE 9000 security and event management system. The scalable system enabled the hospital to “grow from the inside out,” according to Freidenfelds, by allowing the security department to initially focus on specific departments and areas of the hospital that required access control, such as the pharmacy, Labor & Delivery, and the IT department.

With C•CURE 9000 as the foundation for its access control needs, Rush University Medical Center began to incorporate storage areas, food service areas, and employee access points at several entrances along the perimeter of the building into its overall, comprehensive security plan.

One significant addition to the C•CURE 9000 system was the East Tower, a new 14-floor, 846,000 square-foot facility. When this building opened in 2012, it marked the hospital’s complete campus-wide migration to C•CURE 9000 and the introduction of the victor unified video management system from American Dynamics to help the hospital better control its video surveillance and easily locate video to identify criminal activity.

With the integration between C•CURE 9000 and victor, and tying in the existing intrusion detection system, hospital security officers can first evaluate an incident using video and then physically respond, if necessary. Called “exception based viewing” it enables the security officers to focus on an actual activity or event instead of being tied up reviewing inactive video, such as that of an empty stairwell.

Jim Stankevich is Global Manager for Security & Lynx for Tyco Security Products. He can be reached at JStankevich@tycointo.com
Subscribe For Free!
More Videos