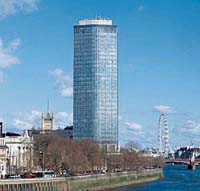 London's Millbank Tower, in a $28 million renovation, included installation of window film for security, safety and energy savings.
From 1997 to 2001, Millbank Tower stood as the political nerve center of the United Kingdom’s ruling Labour Party. Towering over the city of London, the highly-secure, 34-story building earned a reputation as a symbol of Information Age control. Thousands of beeper messages were reportedly sent out every daylight hour to cowed party MPs. Inside, the whirring supercomputer Excalibur sifted through media resources and information libraries, generating myths of James Bond-style political operations taking place within.

“Millbank always looked a whole lot bigger and more sinister from the outside than it did from within,” said former Labour Party head of communications, Lance Price, as reported by The Guardian newspaper. But with its enigmatic tenants relocating to Westminster, the building’s foreboding image was about to change.

Millbank Tower was ready for a makeover. Built in 1962, the tower was in need of comprehensive interior and exterior refurbishment. By the end of the $28 million renovation, the final step was to eliminate the excessive heat and glare that the tenants had to endure. Being a Grade II listed building, any proposed remedy had to meet stringent aesthetic and technical criteria. 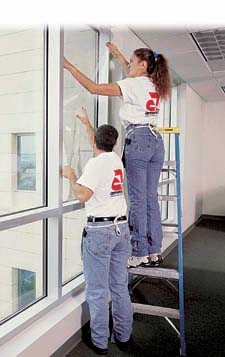 Materails from Bekaert Specialty Films of San Diego can easily retrofit during remodels, upgrades and renovations. Multi-purpose films can fit numerous types of facilities.
The project supervisors managed to address safety concerns, the glare problem and revamp the building’s exterior with a single product. Similar to coatings installed on security-sensitive U.S. federal buildings, including the Capitol, FBI Headquarters and the Pentagon, Armorcoat 4 mm Stainless Steel 30 solar safety window film would cut 100 percent of UV light and 54 percent of total solar energy. Approximately 120,000 square feet of the attractive, soft neutral grey film was retrofitted to the windows.

Installation of the Armorcoat film, with Bekaert Specialty Films of San Diego handling such safety and security films, dramatically improved the aesthetics of the building by giving the glass a beautiful, uniform appearance. Its solar light blocking ability drastically reduces premature fading of furnishings, annoying glare and uncomfortable heat, and significantly heightens energy efficiency in the climate control system. Additionally, it provides shatter protection against extreme weather, an explosion or accidental glass breakage while maintaining high levels of natural light to preserve the striking scenic views over London and the Thames River.

“The installation of ArmorcoatSolar Safety film has been a crucial element in improving the appearance of the building and has the practical advantage of improving the climate inside as well,” said associate property manager Tony Ryan. “So aside from reducing energy costs, Armorcoat has become an attractive addition to the London skyline!”