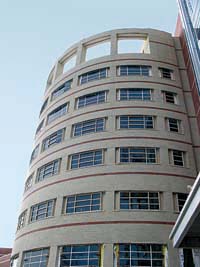 Jacobi Hospital’s new facility is to be completed this spring and will boast cutting edge digital video security.
A hybrid video surveillance plan – combining analog and IP addressable digital – is a solid prescription for better security at Jacobi Medical Center.

This summer, construction should be completed on the nine-story, 480,000 square foot addition to Jacobi Medical Center, in the Bronx in New York. The facility will provide care for approximately 1.2 million New York City patients.

From its inception, one of the facility’s chief goals has been to provide the latest in electronic security surveillance and monitoring systems. The center currently has several existing systems in place, including a Software House (Lexington, Mass.) access control system and an analog security video system consisting of switchers, videocassette recorders and monitors from a variety of manufacturers.

The plan called for designing a more modern security video system that would incorporate IP addressable cameras and digital video recorders (DVRs). Camera images would be transmitted over the center’s LAN for viewing at a remote command and control center as well as at other strategic locations. The system would be interconnected to a separate head-end and monitored independently from the existing analog security video system.

The system design chosen for this project had to meet the medical center’s parameters, which called for the system to:Several different design concepts were evaluated before the center finally decided upon a hybrid system configuration.

There are two main methodologies for configuring an IP addressable surveillance camera system. One is a straightforward system in which the images from all surveillance cameras are sent over the user’s network to a remote command and control center. This method often places a burden on the telecommunications network because of the bandwidth demands involved. In addition, current limitations of computer processing power and the inherent nature of video compression algorithms typically result in low-resolution images sent at a fairly slow refresh rate.This is because when video is sent over an IP network, the computer at the central command and control center has to first decode the video, then write it to a hard drive, and finally buffer it.

The process uses a lot of computer processing power and the effect is multiplied as more cameras are connected to the system. When an alarm is generated or an event has occurred, it can, as a result, take a long time to process this critical information. In a security application, this time delay is often unacceptable, because critical information needs to be received immediately. This effect can best be seen when viewing full streaming video on a PC. The central processor becomes over-burdened, resulting in the inability to process other tasks efficiently.

When video is compressed and sent over a network, the resulting image is often glossy because the video images need to be sufficiently compressed to fit within the available network bandwidth. With a JPEG algorithm, high levels of compression result in the images beginning to resemble blocks, thereby obliterating subtle details. For purposes of prosecution, a recorded image needs to be of the highest quality possible and capture the greatest amount of critical detail.

A more suitable methodology is a hybrid system using network cameras that have both analog and IP addressable digital outputs. In this case, analog video from surveillance cameras is sent to locally installed DVRs via conventional coaxial cable. In addition, each camera has the ability to connect to the network via an RJ-45 jack provided on the rear of the camera. Both the output of the DVR and the network cable from the camera interface to a 16-port switch that is in turn connected to the client’s LAN (see Figure 1).

A hybrid system typically will yield 480 lines of horizontal resolution, as opposed to some 300 lines with a straight IP addressable system. In order to obtain equivalent quality images in a straight IP addressable system, one would essentially need to employ higher grade encoders and decoders, have an encoder for each camera in the system, and limit the number of cameras per PC to only four or five. This type of design is impractical and costly.

The main advantage for the medical center employing the hybrid design is that all recording can be distributed in various telecommunications closets throughout the facility rather than being centralized, resulting in a higher degree of survivability from attack. Any camera in the system can be viewed live from the remote command and control center. Alternatively, security personnel can query any DVR in the system for a history of events or for recorded video images.

The hybrid system provides a high resolution and, because of the proprietary compression algorithm used, compression losses are minimized. There is no critical LAN bandwidth issues or data processing limitations imposed on the system by the computer central processor. The result is 720 x 480 lines of video resolution transmitted at a high refresh rate.

To further maximize the recording capability of the DVRs, the system was configured to record only motion-activated events. Programmed to record at four images per second at a medium level of compression (field mode) with 50 percent estimated motion activity and a typical file size of 13 kilobytes, each 320 gigabyte hard disc recorder will be able to archive more than 10 days of video images at a fine level of resolution. By effectively reducing block/edge noises during compression, the system should be able to produce high quality pictures. Eliminating redundant data between adjacent fields should also help to achieve a 100 percent improvement over a conventional algorithm.

Sidebar: Inside the Facility

Founded in 1955, Jacobi Medical Center has more than 500 beds and is the largest public hospital complex in the Bronx. It currently serves more than 1.2 million New York-area residents. The hospital provides acute, general, psychiatric and specialty services, as well as providing early health screening.