Implementation of a new integrated access control system at major correctional centers helps cut the time to deliver an alert to the emergency response team. For example, the security system at the Hampden County Correctional Center (HCCC), Ludlow, Mass., had been experiencing a high level of traffic – over 100 routine system events per minute. The systems include door alarms, guard tours and other monitored events. To rectify the situation, the correctional center selected System Galaxy from Galaxy Control Systems, Walkersville, Md., primarily because inputs in the new system can trigger outputs without connecting to the host computer, reducing processing demands while also maintaining the alarming system even in the event of a host computer outage. The special operations team appreciates getting a jump in responding to an alarm. The officers also feel better because they know their backup is only seconds away. The security staff also likes the flexibility of the new security system, which handles not only officer-needs-assistance alarms, but also perimeter alarms, the watch tour system and monitors nearly every critical aspect of the physical plant.

With 11 separate buildings and about 1,200 inmates, HCCC is the largest county correction facility in Massachusetts. Perhaps the most critical requirement from a security standpoint is providing immediate alerts to the response team whenever an officer in one of the inmate pods issues a request for assistance or duress alarm. Another important requirement is providing continuous monitoring of the large number of doors within the facility. Each time a door is opened, an alarm is issued and the staff member passing through the door contacts the control center. The correctional officers are also required to perform regular checks on the inmate population while the security system documents that they have actually been completed. Finally, there are a great number of critical mechanical systems in the facility, such as generators that provide power in case of an outage, which must be continuously monitored to ensure performance. 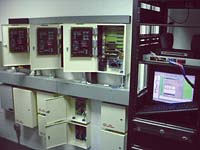 The Galaxy equipment can link the alarm inputs to the paging system independently of the host computer, whereby the system will still transmit alarms even in the event of failure of the host computer in the central control room. This creates a true redundant system for all critical response alarms.

The security management system previously used at the facility began to show limitations as alarming and monitoring requirements grew over the years. “The security team at the facility was not unhappy with the system that was supplied in 1992 when the facility was built,” says Craig Halloran, president of Security Design, Ashland, Mass., the dealer that provided the system. “It performed the functions that were needed and was probably the best technology that was offered at the time. However, as growth in the computer and technology industries increased, the facility’s needs increased. Because of the limited speed and processing power that was available with the old system, future hardware expansion was impossible. The system was growing more obsolete with every passing day. It was time to upgrade.”

A few years ago, because of existing performance needs along with Y2K issues, the Sheriff’s Department upgraded its access control and security systems to the next level of systems that was offered by its equipment manufacturer. Working with Security Design, the system was upgraded. However, a number of hardware and software problems were encountered with the new equipment. With multiple buildings, access controlled doors, and over 700 alarm inputs and outputs, the system could not provide for the security needs of a facility the size of Hampden County’s. The Sheriff’s Department decided to remove the system and replace it with a system that would meet their needs.

According to Halloran, “The facility was in a dire situation. With the life safety of staff and the security of the community at stake, they had no alternative but to look for yet another system. We worked closely with the facility to make sure that they found a system that would meet their needs.” Security Design helped analyze the security requirements of the correction facility. “We jointly looked at most of the major security system providers, including all of the big names, and came to the conclusion that Galaxy was the best fit for a number of reasons,” Halloran says.

“One of the functions of the Galaxy system that helped win correctional facility management over is that it will accept a direct fiber connection,” Halloran says. “Because they have had many lightning-related problems in the past, they decided that any new equipment would use fiber optic data communications. They also did not want to rely on an intermediary device, such as fiber modems or transceivers for data communication. The more individual pieces of equipment you add to a communication system, the more chance for failure. They like to keep it simple. They also like the fact that the Galaxy interface boards are hot swappable. In a high security application, the ability to service equipment without shutting down critical security functions is invaluable. Being able to hot swap system components makes it possible to troubleshoot without jeopardizing security. Finally, Galaxy has a host-independent architecture in which single or multiple inputs can trigger one or more outputs system-wide without connecting to the host. The fact that the input to output programmed responses work independently of the host computer system means that the programmed functions of the system will still work in the event of computer failure, service or rebooting, etc.," Halloran says.

The Hampden County Sherrif's Department staff worked with Security Design throughout the installation, even completing the Galaxy Control Systems' manufacturers training certification course. The county technicians designed and installed a new fiber optic data communication system for the new Galaxy equipment and ran multimode fiber cable between the buildings dividing the system into three independent data communication loops. One major obstacle to overcome was that the staff needed to keep both the old and the new systems operating simultaneously for the duration of the project. The new Galaxy system had to be installed, programmed and fully operational prior to the old system being dismantled. The input point, alarms and program functions were then migrated from the old to the new one piece at a time over the course of the installation. This was accomplished through careful planning and coordination between Security Design, the Hampden County Sheriff’s Department and Galaxy Control Systems. The database was compiled and imported into the system at Galaxy headquarters in Maryland prior to shipment, saving precious time in setup and keeping system downtime to a minimum during the installation. The project went as smooth as could be anticipated offering an almost invisible transition into the new Galaxy System.

A key advantage of the new system is that it is very easy to train an operator to navigate and manage the system. The software also allows for multiple levels of permissions that allow supervisory staff to be able to perform their required functions without compromising system security. The central control room staff now have a good deal more control over their facility with much less risk of system security violations.

The system receives security alarms from both inner and outer perimeter devices, officer “duress” alarms, door security alarms, fire alarms, and also receives building systems monitoring alarms from the facility back up generators, freezers, coolers, fire pump, sewer pump, fire alarms, sprinkler systems and sewage grinders. The Galaxy system records the officers cell checks in all of the 28 inmate housing pods and provides a means for monitoring staff accountability as well as providing documentation for the purposes of liability protection.