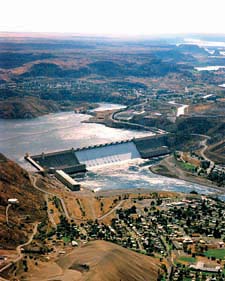 From the beginning, security at the Grand Coulee Dam was always important. That was when the dam, situated on the Columbia River in Central Washington state, first was commissioned. Fighting the Axis powers in the 1940s, America needed to power up its northwestern states’ aluminum industry.

Today, the facility, like most hydroelectric dams, nuclear power plants and other major utilities, faces a different kind of threat: domestic and international terrorism, in which the infrastructure is a potential target.

The U.S. government now spends significant dollars on ways to better protect such plants as well as on research and development of new security solutions. Between the U.S. Department of Homeland Security and the White House’s Homeland Security Council, an estimated $40 billion is earmarked to local, state and federal security endeavors this year, with another $7 billion aimed at anti-terrorism research.

The U.S. Bureau of Reclamation manages the Grand Coulee Dam and its complementary Columbia Basin Project. An agency of the Department of the Interior, the Bureau contracted just months ago with the U.S. Army Corps of Engineers for a $4 million upgrade of the dam’s integrated security system that blends video surveillance, intrusion detection, electronic access control and communications subsystems.

Adesta, a multi-discipline infrastructure service provider and integrator with headquarters in Omaha, will install and upgrade the integrated systems. In addition to the Corps, Adesta security clients have included the FBI, U.S. military facilities, the California National Guard and the Smithsonian Institution, yet the dam still represents a daunting assignment for the company.

The United States has 75,000 dams nationwide, but according to Federal Emergency Management Administration Director Joe Allbaugh, “There are approximately 10,000 dams in the U.S. whose failure, from any cause, including a terrorist attack, could result in loss of life, significant property damage, disruption of critical facilities and environmental damage.”

The nuclear facility on Three Mile Island (TMI) was made famous by surviving a core meltdown in 1979. Today, the site contains a top-of-the-line security system that was shown off during a press tour offered by TMI Manager of Security Michael Bruecks and Hugh McNally, Mid-Atlantic region manager of nuclear security for TMI co-owner Exelon Energy.

TMI now boasts a strong safety record but, largely due to its past notoriety, the island remains a key target of terrorism. Most recently, there is speculation that Spanish-based Islamic terrorists sent e-mails about the facility.

Among security upgrades, there now are more armed guards at the main gates, with TMI’s private security force often augmented with National Guard troops and state police officers. The latter two can carry automatic weapons and guards are authorized to shoot to kill.

Visitor parking is located at least 200 yards from the nearest building. All vehicles are checked for explosives. Much like the perimeter of a prison, there are two sensor-equipped fences around the TMI facility. Guards search plant workers and authorized visitors through metal and explosive detection systems. Access to the facility is controlled by a combination of electronic cards and biometrics.

TMI also is in the midst of an upgrade of an extensive array of outdoor sirens as part of its emergency warning system. They are placed in the area surrounding the facility.

To be completed this summer, TMI officials will add 14 new sirens and replace six sirens with more powerful equipment. At the end of the upgrade, there will be 93 sirens within ten miles of Three Mile Island. The first siren was installed in 1982 and the array is complemented with routing of emergency messages through first responders, local television and radio stations.

The acoustical capacity of the siren system, at the end of the retrofit process, will increase by about 20 percent. TMI officials said that, while the existing system covered a required 10-mile radius, increases in the population and changes such as vegetation growth, increased traffic and new roads and structures underlined the need to boost the siren sound level.

Over the past two years, TMI security installed new computer monitoring gear, new siren electronic communications equipment and new communications radio and receivers at county dispatch centers. These and the siren upgrades will cost about three-quarters of a million dollars.

Still, nuclear plants remain somewhat vulnerable to other extreme attacks. Very large truck bombs could, some suggest, create an earthquake-like effect that may break apart pipes inside a plant. Security specialists also are concerned about the threat posed by airplanes – hijacked or simply malfunctioning. There is an ongoing controversy related to the extent of damage to a facility from an airliner crashing into the structure, given all the more significance by the Sept. 11 terrorist attacks.

Yet major facilities like Three Mile Island and the Grand Coulee Dam are committed to focusing money and manpower to combat terrorist threats that are now all too real.

The American Public Power Association recently published a Security Checklist and Guidance Manual for mid- to small-sized power generation and distribution utilities. The manual also provides valuable information for other types of facilities. It includes a means to self-evaluate a facility as well as provide case studies. Security magazine readers can obtain information on or order a copy of the $60 publication by visiting www.appanet.org/publications.