In the late 1880s, when electricity was still young, a great conflict arose concerning the medium by which the powered world would receive its electricity: alternating current (AC), the brainchild of Nikola Tesla, and direct current (DC), as promoted chiefly by Thomas Edison. The War of Currents included, among other ploys, the invention of the (AC-powered) electric chair by Edison’s Menlo Park Labs to paint Tesla’s system as deadly.

Today, most people in the tech savvy world of security have seen at least one or two headlines discussing a different holy war of the IT industry: the battle between Microsoft’s Windows operating system (OS) and that of Linux. Devout followers of both platforms frequently and fervently espouse the benefits of one technology over the other, in what has become a heated debate not seen since Tesla vs. Edison. As the convergence of physical security and IT has gained momentum, such debates are no longer solely the domain of Microsoft technophiles or Linux zealots, but becoming practical discussions for security directors worldwide.

The PC has steadily become a core component in security system infrastructure. Security directors are slowly being exposed to both operating systems as competitive system designers seek to differentiate themselves in the marketplace, building their products and systems around the performance, functionality and interface variations of either OS.

Anyone to ever own a PC is familiar with Windows. Linux, although widely adopted, is not nearly as well known. In 1991, Linus Torvalds, a 21-year-old student at Helsinki University, decided that the Intel architecture – the computer processor used in PCs – could support a new version of Unix – the operating system used by mainframe computers in universities and large corporations. And to the surprise of many, it took off.

One of the major reasons for its growth was that Torvalds opened the platform to anyone who wanted to help develop it. Access to the system’s code enabled passionate developers worldwide to improve and augment the system. It was through this collaborative development effort that Linux has achieved its current form, functionality and adoption. Estimates suggest that between 5 and 30 million computers run a version of Linux.

Linux has several strengths in today’s market. (Of course, all items claimed as “strengths” by one side are hotly debated by another.) Aside from free distribution, most users espouse the platform’s stability and security. Followers claim that the Linux systems avoid crashing for longer periods of time than other operating systems, and are more resistant to hackers and viruses; the ubiquity of Windows has made it a much more favorable target. Perhaps more importantly, Linux has been ported to several new hardware platforms (beyond Intel) and is sometimes the only operating system available for smaller volume chips. 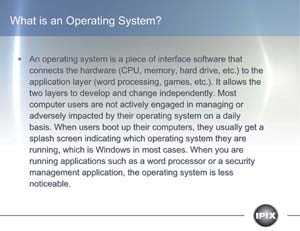 Windows also has its obvious strengths. More than 90 percent of computers in the world run a Windows operating system of some kind. Because of the large market size, there are many more applications that run on Windows than Linux. In addition, Windows gained traction in the market because it is easy to install and use, and, based loosely on the user-friendly Macintosh OS, requires little user training. For in-depth computer administration, the base of educated Windows technicians is large, so the expense is lower to the customer than a specialized administrator for Linux. In addition, Windows has made dramatic strides in stability and security in successive versions.

The debate between Windows and Linux comes home to the security market as increasingly more computing power is required in a typical security site. There has long been some form of computing power in many security devices. However, such devices did not require an operating system. For instance, DVRs replaced VCRs (introducing a slew of new functions around compression for storage and analog/digital conversion) and cameras usually contained image enhancement chips (among a few other computer chips), but none of these devices required any advanced computer architecture internally. However, the market is now exploding with new technologies, many requiring significant upgrades in the computing power typically associated with security systems.

In the typical management station, the ability of the PC to handle multiple functions has made itself invaluable. From displaying surveillance video, to controlling gate access, to running badge identification programs, the PC has created an inexpensive platform to run multiple applications that used to be run separately. Overarching applications use the PC’s ability to control entire networks of cameras, and multi-camera visualization solutions are written on a PC platform. Video analytics companies have also entered the market on PC architecture.

DVRs now output data onto networks for remote viewing, and this requires the ability to serve video to multiple users simultaneously. Industry leaders have put advanced network architecture behind their DVRs in order to handle the increased demand and support new functionality.

Even cameras have gotten in on the act, with some solutions now directly serving pages over the network. The flexibility of both lower resolution and higher resolution cameras is being tested. New functionality on specialty cameras also demands additional advanced processing. All of these devices require some type of operating system.

With all of these systems, numerous developers have chosen to use ready-made operating systems (Windows, Linux, etc.) to speed their time to market, and so the choice of which operating system to use rears its head again.

Luckily, the decision left to security directors regarding which operating system to choose is relatively simple. The choice is made for them. In the case of special purpose chips, like those on many surveillance cameras, Linux is one of the only options outside of a proprietary operating system. Its ability to fit into very small storage, as well as its reliability and its security, are attractive. Since the only customer interface to the device is often through a Web site, the operating system usability is almost irrelevant.

For larger security systems like DVRs, the choice between Linux and Windows is more of an option, but only as a matter of selecting a system’s manufacturer. Typically, the only user interfaces for systems such as DVRs are usually through the Internet, so which OS the DVR is using may not be noticeable. Concerns over system stability and security are compelling reasons why some companies have chosen Linux. On the other hand, new device drivers are more readily available for Windows, so DVR manufacturers that want their systems to stay current with new hardware devices or technology advances often choose the Microsoft system. If the customer is ever going to interface directly with the DVR, a Windows platform is also likely to be more intuitive.

For the PCs that the security operator uses, most buyers want a system that requires minimal training, which also dictates a Windows operating system. In addition, Windows has provided tools like .Net and DirectShow that speed development of large applications on a PC.

Security directors may be able to stay above the fray regarding the debate over Windows versus Linux for a while longer. Many devices using Linux don’t need direct interaction with the end user, making the user’s unfamiliarity with Linux irrelevant; and most systems running Windows do so largely to boost the system’s ease of use. The reasons behind these choices have been vastly simplified here, but the fact remains that unlike 19th century power grids, the security market is able to tolerate diversity quite easily.

This tolerance stems from a long history of multiple vendors selling custom hardware. For security directors who are unfamiliar with operating systems or disturbed by the passion exhibited by a Linux believer, don’t be afraid – Windows will remain the primary PC OS for the foreseeable future. However, Linux is running undercover on many devices – encountering the OS could be as simple as looking to the nearest camera.

Both Linux and Windows devotees have espoused an overall superiority for their chosen OS, but the marketing campaigns have yet to approach near the ferocity of the War of Currents. So long as the systems remain compatible, their respective benefits should dictate their application.