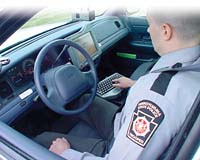 State police in the field now get more information faster thanks to an incident management system tied to emergency 911 calls.

An advanced Incident Information Manage-ment System (IIMS) being developed by Lockheed Martin, Bethesda, Md., for homeland security by the Pennsylvania State Police (PSP) has been put into operational use in Harrisburg, Pa. and its surrounding counties. The south-central region is the first to receive the system component that provides troopers real-time information sharing of law enforcement and homeland security data.

The company, performing under a $127 million four-year contract, is the systems integrator for the statewide rollout of the system, which will modernize PSP data systems for statewide emergency 911 call-taking and mobile computer software, in addition to evidence, criminal and investigative management systems. The IIMS initiative is the first step in streamlining the PSP incident management capability into five regions of the commonwealth, and will help enable improvements in police response and tighter coordination for homeland security.

The system deployed at the Harrisburg center consolidates incident calls for the region. As part of the system, patrol vehicles now have dispatch and incident software on mobile computers, and computer-aided dispatching and geographic information systems to speed troopers to incidents.

“The Pennsylvania State Police troopers are on the front line of ensuring the safety and security of Pennsylvanians,” said John Mengucci, program executive for the IIMS program. “The installation of this first dispatching center in Harrisburg will allow the PSP and its troopers to manage and analyze information more efficiently and quickly through an advanced information sharing network.”

Troopers will use the computer technology to record information at the scene of incidents, process evidence and add information as investigations continue. IIMS will also allow troopers to access data from other departments within the commonwealth of Pennsylvania, as well as other state and federal government agencies. In order to access these networks under the previous system, the trooper had to be at a station or have a dispatcher verbally provide the information.

When complete in 2006, the PSP will have dispatch and incident software into computers in all 1,200 patrol vehicles. The new dispatch capability will also modernize both standard dial and cell phone access to enhance emergency call taking from the public. The second consolidated dispatch center in Norristown will become operational by the end of the year.