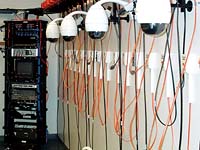 Which method of video transmission is right for you? From coax to fiber optic to wireless, end users have a choice based on the needs of the application. But don’t overlook twisted pair. It is one of the best and safest ways to transmit video data, according to many experts. So give twisted pair a chance as you learn more about it.

The most widely used form of twisted pair, and popular for that matter, is unshielded twisted pair (UTP). Generally, it’s beneficial for campus-wide use or applications that require a high concentration of cameras – casinos and school settings as two examples. UTP allows many communication protocols – voice, data and video – to reside in the same wire bundle.

When compared to other video transmission methods, UTP can hold its own. According to NVT, Menlo Park, Calif., when compared to coax, UTP offers total interference immunity, with most models with built-in surge suppression. Also, active models having built-in distance equalization control for crisp video at all distances can carry transmission distances up to one mile or more, say the techies at NVT.

When comparing UTP to fiber, UTP is a lower cost solution at most distances and applications. Unshielded offers simple termination and installation. Labor, testing equipment and tools are more cost efficient as well. The digital security video market has exploded and UTP has grown with it.

“In the past, video images tended to be transmitted with either coaxial cable or fiber. However, end users have learned that within the 300 to 5,000 foot [91 to 1525 meters] distance of most installations, UTP wire saves money and time while producing a high quality picture," says Guy Apple, NVT vice president of marketing and sales. "This is the same unshielded twisted pair Category 2, 3, 5 or 6 wire that the phone system uses. Our transmitters, transceivers, receivers and hubs let companies exploit what these organizations typically already have.

For at least 20 years, products have been capable of transmitting video using UTP wire. For much of that time, however, UTP balun manufacturers did little more than convert an unbalanced coax signal to a balanced signal for use on the twisted pair. Some companies added gain to extend the distance. Unfortunately, these devices provided inadequate noise immunity, no ground loop isolation and no surge protection. The security market viewed this older technology as a last resort until some manufacturers developed a range of high performance UTP video surveillance products.

NVT has developed a technique of rejecting noise and interference. This allows the video signals to reside in the same wire bundle with ringing telephones, Ethernet, 24VAC, RS-422 or RS-485 data, multiple video signals, etc. Unlike coax, it can also reside in high-noise environments, such as elevator traveling cables, or near fluorescent lights, radio transmitters, motors and generators.

According to the twysted-pair.com Web site, a site dedicated to self-tutorial on twisted pair, the quality of UTP may vary from telephone-grade wire to extremely high-speed cable. The cable has four pairs of wires inside. Each pair is twisted with a different number of twists per inch to help eliminate interference from adjacent pairs and other electrical devices. The tighter the twisting, the higher the supported transmission rate and the greater the cost per foot.

Most campus applications require Category 3 or Category 5 wire. If designing a 10 Mbps Ethernet network and considering the cost savings of buying Category 3 wire instead of Category 5, the Category 5 cable will provide more room to grow as transmission technologies increase. Both Category 3 and Category 5 UTP have a maximum segment length of 100 meters.

“Twisted pair technology has significantly improved over the years because the technology in the wires itself has improved," says Joe Schanda of NVT.

“Initially, UTP used a category 2 or a category 3 wire, which was a lesser quality wire. Perhaps people still don’t trust twisted pair. It should be, however, considered for much more instances than coax and fiber, depending on what you are looking at. Those that end up trying it see that the quality is as good as fiber in quality for distances up to 5,000 ft.

If you go into an existing building, for example, you can use a lot of wires that are already in the infrastructure. Also, when you look to the amplified product line, the signal is very robust," Schanda says.

SIDEBAR 1: On the Market

• Compatibility with existing IT infrastructures to enhance both security

• Less expensive than and reconfigure