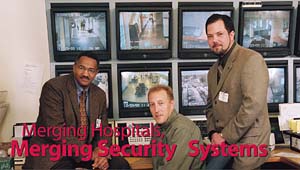 The three hospitals combined employ nearly 10,000 employees who care for more than 55,000 in-patients a year.

Methodist Hospital comprises seven buildings, each of which is eight stories high, and five parking garages. It is located one and a half miles from both Indiana University Hospital and Riley Hospital, situated just a half block apart. The Indiana University Hospital is a cluster of three eight-story buildings joined together, and Riley is a single conglomerate that was constructed in four phases, each with seven floors.

As each hospital was independent, security solutions ran the gamut from outdated analog equipment to cameras that had simply ceased to function. Some of the more than 200 cameras were recorded; others were not. Access control consisted of everything from metal keys to card readers, which, of course, were not interchangeable when the hospitals merged.

"We had outgrown our previous vendor," Pitt Thompson III, vice president operations for Clarian Health Partners says. "It took longer to get repairs on the leased system, and cameras that were out caused potential liability issues. It was a 16-year relationship that they started taking for granted."

Such a failing relationship caused Clarian to search out a new security integrator. "They wanted someone who could not only provide them with the right equipment and services, but one who was also interested in forming a partnership," says Tony Landis, Siemens Building Technologies, Inc., of Sunrise, Fla. This long-term partnership was established when Siemens offered a solution for the install, maintenance and financing of the entire project.

"These cameras encompass all three campuses," Marty Mahan, Siemens’ project manager for Clarian, says. "They include 30 standalone systems that are viewed and recorded via VCR technology within their respective areas and a variety of covert cameras that can be quickly installed for covering temporary situations."

"Due to the size and number of buildings at the Methodist campus," Landis says, "we set up remote nodes in addition to the main server system. These nodes range from a Pelco CM9740 matrix with four DX7000 series DVRs to CM9760 SATs with one to three DX7000 series DVRs."

Cameras can reach these nodes either by direct cable or via IFS fiber optic modules, which are scattered out in even more remote locations. All remote nodes are then fed back to the main server via IFS fiber modules and Raleigh, N.C.-based Telesyn’s fiber optic network converters (for accessing the DVRs).

The main server room contains a Pelco CM9760 matrix, eight MX4000 series multiplexers and eight DX7000 series DVRs for gathering the remaining camera signals for recording. While most of these cameras are fed via direct cable or fiber optics modules, there is one that is fed from a combination SmartSight microwave system and fiber optic module.

The camera was placed in a remote parking lot that had no existing cable back to the main campus. It would have been very costly to have cable installed since it would have had to traverse nearly a half-mile distance across the city and across private property. Siemens installed the camera on a microwave tower and used the microwave to send signals to the closest Clarian-owned building where it was then converted to fiber optic cable. 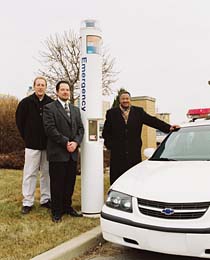 Emergency call stations are part of the merged upgrade by the team of Mahan, Landis and Clarian's Thompson.

A central personal computer (PC) is in the server room for technicians to program and monitor the matrix system, as well as have access to all DVRs for viewing, retrieving and recording images. Additionally, several remote PCs running Pelco’s CMS software enable authorized personnel outside of the security department to view, retrieve and record images in their offices.

One of the biggest planning issues was getting the digital images from each of the hospitals to the central dispatch office.

"The only link between the campuses was their Intranet infrastructure and network bandwidth was obviously a huge obstacle for so many cameras," Mahan says. "We met with Clarian Information Services to discuss the option of using their infrastructure to transmit the data, and they provided us with a connection that gave us nearly 700MB of bandwidth. That solution, coupled with PelcoNet transmitters and receivers, gave security the ability to view the cameras from all three campuses."

While Clarian initially hired Siemens just to install the new cameras and cabling, the relationship soon expanded to the role of security consultant as well, Landis adds.

The campuses had existing panic alarms that were tied into their environmental control system. That meant that, upon alarm, security was not immediately notified. Siemens proposed to reroute all the existing panic alarms onto a dedicated system that the main security dispatch office could monitor. By adding multiple Radionics, Salinas, Calif., alarm panels and central alarm receiver in the dispatch office, security personnel would be notified of the exact location of a panic alarm event.

"The biggest challenge was the retrofit process," Thompson says, "as they had to open up walls and ceilings to install the new upgrades while the hospitals continued to care for their patients."

But, he adds, "The biggest advantage is the ability to immediately get to images, so if we get a call that someone has just snatched a purse, we can immediately go to that camera."

Keeping track of the location of so many cameras was difficult before the new system, Thompson says. "Siemens installed a (Pelco VMX-200) computer-driven control system with CAD drawing overlays – as an add-on – that allows the security officer immediate access to desired cameras. Without the system, they would have to go to their security manual to verify which cameras they needed and punch in the appropriate code. This system allows them to go to a screen with the building drawings, select the floor and cameras for faster access."

Thompson says that the new system has given the dispatch officers more confidence with the system. With the old system, "the camera might not work, and we had to change tapes every hour."

"You can imagine over the span of a year that the tapes wear out," he continued. "But the worst part was that we could only keep them a week, because we had to archive tapes from over two hundred cameras. If we had to go back six days (to locate and event), it was a challenge. Eight days ago, it was already gone. Now we can permanently archive incidents for future reference."

In just the first year since installation, Clarian has experienced several positive rewards from its new integrated security system.

"One of our doctors saw a man carrying a weapon in an elevator," Pitt Thompson III, vice president operations for Clarian Health Partners, says. "The doctor got off the elevator and called security. We located the man, but found no weapon. Since he had a legitimate reason to be there (visiting a patient) we couldn’t do anything more. But the next day he came back. The dispatcher followed him with the cameras up to the rooftop parking area. Using the PTZ cameras, we could see into the car and saw a gun on the front seat. The man was apprehended, and no one was hurt."

On another occasion, someone reported a stolen purse in a lobby. Security replayed the images at the time of the reported theft, and was then able to trace the purse snatcher as the person moved into a different lobby, still carrying the purse.

The digital images have even saved a child from abuse, right in the hospital corridors.

"A man came through the facility, literally beating his children," recalled Thompson. "He had a child in his arms and dropped the child to the floor. People walking through the lobby saw the act and security was contacted."

"We see that the systems have served as a deterrent," Thompson says. "We are sandwiched in by residential neighborhoods, and the word travels fast."