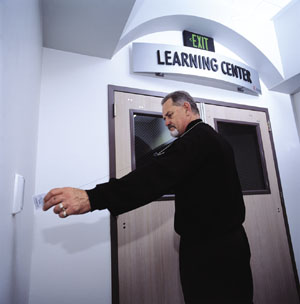 The company found itself with an illogical security system. Several years ago, Xilinx, the leader in complete programmable logic solutions and based in San Jose, Calif., operated three campus locations, each with a different access control system. The many employees who traveled between the sites had to carry three different badges.

When the company’s first internal security manager took over in 1997, he realized changes were in order.

“Not only was the arrangement a tremendous inconvenience for our employees, I had a difficult time understanding and managing three different systems,” says Ron Pennington, security manager for Xilinx. “I knew there was a better way to provide the high level of security that the company needed and I wanted to find it.”

But rather than tackling the job internally, Pennington heeded the corporate philosophy that included researching outsourced services whenever possible. The national system integrator Xilinx had been using was not performing up to Pennington’s satisfaction, so he sought a firm near his offices in San Jose. The search led to San Jose-based RFI Communications & Security Systems.

In hiring RFI, Pennington got more than he bargained for. And the continuing relationship between end user and system integrator underscores the critical nature of the evolving electronic security arena and the need to emphasize systems integration within complex and far-flung facilities.

To keep up with tech change and to better handle enterprise businesses, integrators are changing, too, often in ways that combine strengths and locations of separate integration firms.

For example, along with its own expertise, RFI brought with it the backing of 13 other local system integrators located across the United States and Canada that have affiliated in an organization called SecurityNet.

Founded in 1993, SecurityNet is a network of independent system integrators, offering clients a single responsible source for meeting all electronic security needs in commercial, industrial, educational, government, financial and public sector facilities. Check a sidebar article in this cover story for more information on systems integrators and SecurityNet.

“When we first brought RFI on the job, we didn’t know about SecurityNet,” Pennington says. “But it turned out that this organization meshed very well with our plans.”

Xilinx had multi-building campus facilities in San Jose, Longmont, Colo. and Dublin, Ireland. Other offices in California, Maryland, Iowa, Texas and New Mexico were being opened. Currently, about 2,500 people are employed in those facilities, performing a host of engineering, testing, administrative and sales duties.

The first thing RFI did for Xilinx was to survey its security systems and then generate a company standard for current and future installations.

“We wrote a plan that could be handed to each facility manager and it included everything from the acceptable head-end access system down to the door locks,” says Brad Wilson, president of RFI and current SecurityNet president. “And then I asked my SecurityNet partners to join us to help make it happen.”

The new security plan, prepared by RFI, settled on a Casi-Rusco Picture Perfect access system, which was already in place at Xilinx’s San Jose headquarters. The system gave Xilinx the flexibility it needed to restrict access to areas such as inventory cages, test floors, accounting and engineering and hazardous materials storage.

Employee access badges are made using the Picture Perfect’s Access Vision system. Those badges can be created at the three campus sites with the capacity to be added soon at an office in Albuquerque, N.M. Smaller locations— most with fewer than 20 employees— send a digital image to the corporate Security Operations Center in San Jose, where the badges are printed. Pennington estimates his department makes more than 2,000 badges annually.

The overall security plan also called for a mix of Pelco and Sony fixed and dome surveillance cameras to monitor sensitive areas such a building entries and perimeters. Robot Intellex digital video recorders were chosen to capture and archive CCTV images.

“That is a very critical thing in maintaining a network and allowing for an orderly shutdown in an emergency situation,” Pennington says.

All of these systems are integrated and monitored at a new San Jose Security Operations Center (SOC), designed by RFI. From there, two or three Xilinx security officers monitor the systems 24 hours a day. Security personnel are also stationed around the clock in Longmont and Albuquerque. Personnel in those two offices may order a response to a local alarm situation or officers in the San Jose SOC may take action. Pennington says the company’s long-term plan is the have the operations centers in San Jose, Longmont and Dublin work together as hubs on a master server.

The SOC is a marvel of technology. Dominating the center are two 42-inch plasma monitors by NEC. Cameleon camera control software from 360 Surveillance allows Xilinx security officers to move their mouse from one plasma screen to the next to choose a scene to view. The officers can also view camera input on 15 rack-mounted Sony 14-inch color monitors. Fiber optics cable is used to link the access control, intrusion, fire, CCTV and radio communications systems. RFI designed the room with plenty of space to move about freely and easily access the equipment for service.

While many of the initial complexities have been unraveled, the corporate security plan is far from being finished. It is an ongoing process that takes into account Xilinx’s domestic expansion plans, as well as those for Europe and in the Asia/Pacific region. Pennington wants to expand the existing security system. When that time comes, SecurityNet will handle U.S. installations. RFI will work directly with European and Asian system integrators and provide them with the RFI drawings to assure that all work is completed to the SecurityNet standards.

According to John Krumme, president of Cam-Dex Security, the SecurityNet model has worked exactly as planned.

”Our part of this project (Iowa) went flawlessly,” he says. “We knew what RFI’s expectation was for this site. With their drawings, it was a smooth install. The Xilinx people knew we represented RFI. But they also knew if there was a local service issue that came up they didn’t have to wait for someone to come from California to resolve it. They knew we could be there right away for them.”

From his point of view, Pennington says the SecurityNet experience was a good one for Xilinx.

“When I started here, we had a patchwork quilt of a security system,” Pennington says. It was cumbersome. We knew we had to fix it. Since then, we’ve made great strides. To a large degree it is the result of the great participation we’ve had from RFI and SecurityNet.”

Of course, that is the aim for any systems integration. “From the beginning, we knew that by sharing common experiences and common problems that we could improve the service we provided our major accounts as they opened offices in other regions of the country,” says Ray Dean, president of PEI Systems in Long Island City, N.Y. “But for this to work, we knew all members (of Security Net) had to share the same dedication to service that we practiced in our own businesses.”

Bill Savage, president of Houston-based Security Control Systems, is one of two of the original members of the group, which was founded in 1993.

“We started with seven members, whose total combined annual revenue was near $20 million,” Savage says. “Today, our 14 members have revenue of $200 million. We are of different sizes and represent different geographical areas, but we all hold the same high, customer-based operational standards.”

Over the years, the make-up of SecurityNet has changed as new members have been added and some have left —most commonly after being purchased by a national integrator. But the spirit of cooperation between the members continues to grow stronger.

“Each company is strengthened by the relationship with SecurityNet as SecurityNet is strengthened by each company,” says Brad Wilson, the group’s current president and president of San Jose, Calif.-based RFI Communications & Security Systems. “Members can share experiences and business strategies without hesitation. This environment is extremely valuable for validation or tactical planning.”

SecurityNet members meet on a quarterly basis to share information that can range from installation solutions to human resources, insurance and marketing issues. Additionally, the organization’s TechNet group of engineers meets to bench test new products, stay on top of new ideas in system design and installation and other related issues.

“Our major endeavor over the last several years has been to develop a set of tools we can bring to a customer,” Savage says. “Those tools are the standards we use internally for how we install systems and the best practices we learned through the interaction of our individual companies.”

While establishing standards, the group also recognizes that not all customers will have the same needs, Savage says. So SecurityNet has developed a number of different methodologies that a customer can select from with the advice and counsel of a member company.

“Many customers approaching a SecurityNet member may not need the full resources of the organization. But they still benefit by taking advantage of the local service, plus the standard of practice, drawing standards, installation standards and backup and support received from SecurityNet.”

Jack Morris, president of Burnsville, Minn.-based VTI Security Integrators, says SecurityNet customers get the structure of a large national system integrator without losing the entrepreneurial spirit of the individual companies.

“Using a national company, customers run the risk of dealing with a branch manager who has no personal investment in the project, unlike dealing with SecurityNet and its members,” he says.

Both customers and equipment manufacturers benefit from working with SecurityNet members. Because of its size and base of well-known customers, SecurityNet can keep job costs lower by wielding significant buying power with equipment manufacturers, says John Krumme, president of Cam-Dex Security from Kansas City, Kan. Also, the group has more influence in getting customized equipment to meet its customers’ specific needs.

And, according to Wilson, manufacturers enjoy the ease of working with SecurityNet and its members.

“They (manufacturers) want to maintain their reputation among end users and know that SecurityNet with its capabilities is much more likely to get things done right the first time and with much less need for technical support,” he says.