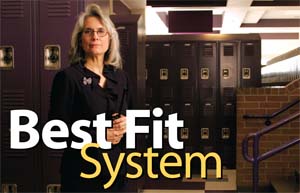 Mary Liz Singleton observed two boys exchanging what appeared to be a wrench while in a school hallway. She approached the boys, who denied they had it in their possession.

The exchange might have ended there, but Singleton, principal at Elgin High, recently received a 22-camera security video system that provides views of hallways and other common areas of the main school building. Singleton told the students she would simply review the video footage to determine what was passed to the boy. If they were found to be lying, she promised to punish them.

One of the boys handed her the wrench.

“Now that the students know we have the cameras in place, they know they won’t be able to get away with these things,” Singleton said.

The high school, in Elgin, Texas, about 20 miles from the state capitol of Austin, has about 950 students in grades 9-12. Late last year, officials from the Elgin Independent School District and Boca Raton, Fla.-based ADT Security Services, a unit of Tyco Fire & Security, began the design of a security system. By mid-February, the system was installed and operating.

Within its first month, the system helped identify the thief of a student’s backpack (which was returned to its owner); clearly documented the participants in two fights; and helped identify the person responsible for releasing stink bombs in the school.

For six years, Fiel served as the executive director of school security for the Washington, D.C. Public School System. There he managed 163 school campuses and protected more than 70,000 students and 8,000 employees. Fiel and Austin-based ADT technicians first walked through the campus with the principal and staff to assess areas of concern, such as perimeter entrances, common corridors and student locker areas. Other locations within the school were evaluated for special consideration, such as the food court and gymnasium.

“We start out by understanding the operational needs of the specific school or school district,” Fiel said. “It’s only then that one can start to talk about applying a solution or set of technologies to assist in the mission, which is to establish a safe and secure environment in which our students can learn.

“We also need to keep in mind important factors, such as the budget,” Fiel added. “Our goal is to provide the best possible system fit and return on investment within that budget.”

The final design positioned cameras so that activities would be captured on video from multiple angles, increasing the likelihood of fully documenting events.

It took about three weeks for the technicians to run cable, install the cameras and monitors and train administrators in the use of the system. The system includes cameras, multiplexers and monitors from San Diego-based American Dynamics, a Tyco Safety Products company, and digital video recorders (DVRs) from Integral Technologies of Indianapolis. The DVRs can record or display up to 16 cameras on a single DVR or monitor.

A technician installs a monitor in the office at Elgin High School, which let students, staff and visitors see that they are being monitored by 22 cameras throughout the school.
Two fixed color cameras are at each end of four hallways, one camera is mounted near the building’s main entry and another views the school office. Seven cameras monitor the locker “pit,” a sunken area off the convergence of three hallways that houses all student lockers. Four more cameras monitor activities in the cafetorium (combined cafeteria and auditorium) and the adjacent food court, where students purchase their lunches. The final camera provides views of an outdoor entrance to the gymnasium.

A 20-inch color monitor is mounted just inside the school office to remind students and visitors that they are under surveillance. An identical monitor is located in a nearby resource room that also houses the multiplexers and DVRs.

Singleton said she hopes to hire, in conjunction with the local police department, a resource officer with responsibility for monitoring the cameras.

“I like that the system will record video for up to three weeks so we don’t have to have someone monitoring activities at all times,” said Singleton, just completing her second year as principal at Elgin High School.

Once full, the DVRs can be archived to easy-to-store compact disks or DVDs for later review. The system only records when the cameras detect motion in order to save space on the DVR hard drives. Singleton and her two vice principals are authorized to view the live and recorded video from their office or home PC.

Last year, Elgin High was named the safest school within the central Texas area. Yet the principal said she is looking forward to improving on the school’s safety and security.

“We have many of the same problems you find in large urban schools, things such as fighting, graffiti and trespassers coming on campus,” she said.

One of the more vexing problems has been students dialing 911 from the pay phone near the office and then hanging up. The police get frustrated when they have to continually dispatch an officer for no good reason.

“Now we will be able to match the time of the call to the timestamp on the video to see who is placing these calls,” Singleton said. “I expect we will see an end to this very quickly.”

She said the camera system has generated very few negative comments from the students. Shortly after the system was installed, several students had very positive comments about it.

“It’s going to cut back on the fights and the stealing out of our lockers,” said senior Natalie Harris. “The cameras are going to provide a safer place for us. We’re here to get an education, not just play around.”

Singleton said she had spoken to a number of parents, nearly all of whom had also been very supportive of having cameras in the school.

“A few parents called with questions about privacy, but we were able to reassure them that we would not be watching their children in the restrooms or classrooms,” she said.

The 21 indoor cameras provide views of virtually all common areas of the main building. That will, according to Singleton, help administrators to create a safer campus.