This special report from SECURITY Magazine and SDM Magazine features the top technologies that buyers feel are more essential today. Product categories include video surveillance, electronic access control, photo identification, intrusion detection, systems integration and new technology. Products in this report represent some of those technologies. There are more products covered elsewhere in this special issue. 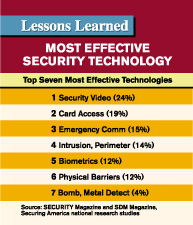 Beyond the shock of death, destruction and vulnerability of September 11th, the events of that day brought home to security directors and managers the need to keep one step ahead of the threats that they face, whether from a terrorist or a vandal. While few facilities are targets of international terrorists, most are targets of criminals, domestic terrorists and employee thieves who are more likely to cause trouble and losses.

According to research by SECURITY Magazine and SDM Magazine, security buyers are fortifying their organizations in numerous ways, often and rightly based on their type of business, location and level of threat and liability.

The top type of security product according to SECURITY and SDM magazine research of buyers: video surveillance. Based on the decreasing cost of the equipment, the deterrent and identification abilities of the gear and the productivity and return-on-investment gains of digital equipment, video surveillance gear is very popular with security buyers.

There are numerous advances at play.

The two overall advances are black-and-white to color and analog to digital. While many security departments have already shifted to color cameras and display, the evolution to digital is more deliberate, with many users shifting first to digital video recording, storage and transmission systems.

There also is growing draw by buyers to Internet-based video surveillance systems. This is playing out in two major ways: first, cameras and camera “gang-connections” come bundled with Web addresses and, second, video monitoring systems use a Web browser or are packaged as ASPs over the Web.

In the aftermath of the events of September 11th, many more working people would like to have tighter security measures at their workplace than have them.

These are a few of the results of a Harris Interactive survey that was conducted for Privacy & American Business. This study supports SECURITY Magazine polls.

Security buyers at many organizations have extended out the perimeter monitored by electronic security systems. They also have increased use of sensors and detectors while some have also added or shifted from contracted central station to monitoring to proprietary monitoring.

Without a doubt, most organ-izations view fire and burglary alarm systems as the bedrock of security - the first line of defense, so to speak.

Among advances since September 11th: there is use of more perimeter systems that use outdoor sensors or fiber optics. Some organizations with burglar and intrusion alarm systems report they have added detectors and sensors to more windows and doors.

With the stakes higher than ever in protecting people and facilities, security directors and managers are seeking out more interfacing and integration of their various security systems so that they have an immediate, total picture of what is happening, especially during alarm and crisis situations.

Integration, according to an excellent discussion document from the trade organization Security Industry Association (www.siaonline.org), falls into numerous levels. Obviously, a common type of integration is at the component level where a piece of equipment is designed to be part of a system.

A level higher covers interfacing of systems most often via two-way communications or software. There are several interface approaches including custom and bundled interfaces as well as front-end and open interfaces. Front-end software, for instance, offers a single, configurable interface and a master database. Such an approach here helps end users facing new post-September 11th threats not only my providing more information linked together but also simplifies training of operators of the subsystems and monitoring screens.

Today, there’s a greater push to true integration. The experts feel that systems can only be considered integratable if they are designed to seamlessly share, compared to duplicate, system resources. There has been much talk about open systems integration - a kind of high level play and play configuration. 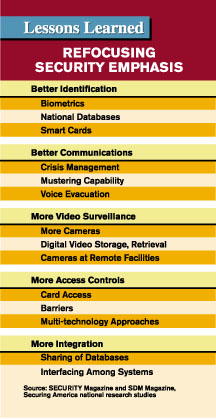 With Federal, state and local governments spending billions of dollars in their shared terror-fighting effects, a significant amount of dollars is going to the development of emerging and new security technologies.

There are four primary areas:

Biometrics — while the technology, in numerous stages of development, has been around for a couple of decades, there has been renewed interest in and accelerating development of computer-based systems that use an element of a person’s identity (eye, fingerprint, hand, voice, face, to name a few) to first better identify the person and, sometimes, to allow the better identification follow through to access into a computer system, through a door or onto an airplane.

Smart cards — once thought of as just a financial instrument, smart cards are more attractive to security directors and managers looking for higher level and multi-technology access controls. Here there is a heavy buy-in in transitioning from magnetic stripe and proximity cards to smart cards and readers. Some prox card firms have introduced dual smart/prox cards. More importantly, manufacturers of smart cards have gotten per-card cost down to less than one dollar.

Detectors and sensors — never since the end of World War II has the security industry seen the involvement in new types of sensor and detector approaches and equipment. Some of it is very specialized, of course. The Federal government, for example, is developing and will soon implement detectors to alert on “dirty nuclear weapons.”

Cyber crime fighting — according to SECURITY and SDM magazine research, business and government organizations believe the next shoe to drop will involve attacks via the Web or through computer networks. There is much on the market and soon to be emerging to alarm on computer intrusions and to provide higher level access into computers and networks.

The plans and support for implement of the U.S. answer to September 11th are falling into place. Last month, President George W. Bush introduced his Admin-istration’s homeland security plan which, in part, calls for more aggressive domestic intelligence work, national standards for driver’s licenses and more security at the nation’s borders.

There are six critical missions:

• defending against catastrophic terrorism (weapons of mass destruction); and