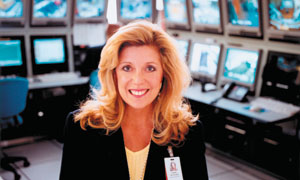 After 22 years in the security industry, Bonnie Michelman continues to meet challenges head-on.

Massachusetts General Hospital, Boston, is a world-renowned hospital that employs over 14,000 people and opens its doors to over 60,000 visitors daily.
Bonnie Michelman, a Certified Protection Professional (CPP) and Certified Healthcare Protection Administrator (CHPA), has been working in the security industry for 22 years and is still going strong. For Michelman, there is never a dull moment. As the Director of Police, Security, and Outside Services for Massachusetts General Hospital, Boston, and the President of the American Society of Industrial Security (ASIS), she is an industry leader. By day she faces the challenge of securing a four million-square ft. facility, with dozens of satellite and research facilities. In her spare time, she dedicates herself to the industry's leading professional organization. And in the wake of September 11, Michelman is also one of many security directors faced with a new challenge: keeping America safe.

"In healthcare security, there are a lot of issues that weigh heavily on the security director's plate," says Michelman. "Hospitals are tough environments, with many potential vulnerabilities."

Since 1991, Michelman-along with a staff of 200, including several licensed police officers-has been responsible for maintaining a sense of safety and security in all areas. Managing patient population is one area of concern. It can be difficult, considering the patients have a range of physical and mental competencies. Hospitals also handle large numbers of narcotics, which need to be kept secure. Infants are also a high-risk population. Medical research and research conducted on animals is a sensitive issue, often inciting animal rights activists. So is women's health, for fear of pro-life radicals.

"We have an organization with a blend of people from various cultures, both working at or visiting our facilities," says Michelman. "There are a lot of portals to gain entry, and its hard to know who is here and when."

Every area of hospital security falls under Michelman's jurisdiction, including some less-obvious areas. These days, she's also involved in areas of cyber crime, HIPPA compliance, and disaster planning. The role of the security director is no longer one-dimensional. There is nothing black and white about it.

"Another critical responsibility is to maintain very strong liaisons with local, public, state and federal law enforcement and other agencies; i.e. secret service, FBI, DEA, and other agencies that we work with consistently," says Michelman. "Often times, the hospital will need the cooperation of these agencies, so it is important that a good relationship is maintained."

The new dispatch center at Massachusetts General Hospital, Boston, is an integral part of the security operation.

Bonnie Michelman never planned on a career in security. She was headed in a different direction when she stumbled on to security.

"I was on my way to law school and had some problems with my funding," says Michelman. "I decided to pursue another offer of a full scholarship to Northeastern University, Boston, where I obtained a Masters degree in Administration of Criminal Justice/Security Management. It was there that I was exposed to the industry for the first time, and I fell in love with it. Many people get into security after retiring from law enforcement or the military, but I really chose this."

Northeastern University also provided Michelman with her first exposure to The American Society for Industrial Security (ASIS). This would also prove instrumental in Michelman's career choice.

"One of my professors took me to an ASIS meeting. I had never heard of the organization, but once I got there, I became very interested. I began doing some informational interviewing of other ASIS members and attending meetings regularly. I really believe in my heart of hearts that had I not gone to that ASIS meeting at that time, I would not have chosen security."

Through the years, ASIS has proved a valuable resource in Michelman's career. She has dedicated thousands of volunteer hours to the organization for which she now serves as president.

"My membership in ASIS has helped me more in my career than anything else," says Michelman. "It has made me more credible and more well-known. I have held many offices and served on many committees, and my membership has also led me to pursue other avenues, such as public speaking, mentoring, and writing. And, some of the best friendships I have in the world are a result of my involvement in ASIS. I will have them for the rest of my life, and you can't put a price tag on that."

In addition to her work with ASIS, Michelman is also a member of the Massachusetts Safety Council, the International Association for Healthcare Security and Safety, and is a certified international instructor for the Management of Aggressive Behavior (MOAB).

Being a woman in a male dominated industry might prove daunting for some. However, being a woman was never something Michelman liked to focus on.

"I think the same opportunities are available to women that are available to men in this industry," says Michelman. "I think the breadth and depth of this industry is enormous, and there is a great need for people from all walks of life, from all backgrounds educationally and certainly from all genders and cultures. There is great opportunity for good people, it doesn't matter if its men or women."

It's not to say that there have not been challenges along the way. "I don't mean to diminish, it has not been simple. But I don't like to focus on it," says Michelman. "There has been some change in perception. When I started in this field, I tried every which way to look as much as I could like a man. Then I realized that I had to bring ME to this. I had unique characteristics and unique skill sets, and an approach that would benefit the industry. It wasn't necessarily right to try to look like everyone else."

Industry reception of women has been disparate, according to Michelman. There are times when women are received wonderfully; at other times there may be people who are a little archaic or skeptical of any minority in a field that is considered theirs.

"There have been people who are not open or welcoming, and they are usually insecure people. I think women are received well if they are good at their job. I think people are received well if they are high quality, if they add value, if they are hard working and if they try to move into an arena that is collaborative and helpful in this field. But to say there is no scrutiny would be wrong, because there is scrutiny of minorities. There is scrutiny of people based on age, background, and certainly on gender. Anyone who is a minority in any field probably faces the challenge of being scrutinized a little more than other people, and maybe needing to work a little a harder to show their credibility. But for the most part, women face the same challenges as men in this industry."

While some industries offer specific resources to women, Michelman has never been a proponent of gender-specific groups.

"There are no different resources for women than there are for men in this industry," says Michelman. "And I support that. Creating splinter groups continues to perpetuate the delineation and the differentiation that we as a minority group in this field have tried to avoid. I have never been a proponent of female security groups. How are we going to help the cause of integrating security to be truly a group of diverse professionals if we do that?"

Massachusetts General is a four million-square ft. facility, with dozens of satellite and research facilities.

While the security industry is still male dominated, women are making a strong showing (see sidebar, page 10). In light of recent events, there is a tremendous growth opportunity for people in the security industry, and for those thinking of entering. Not only men, women, too.

"I think that given the fact that three out of four people leaving the work force and retiring are white men, that means that three out of four entering are not white men," says Michelman. "And women for the first time this year ever in the history of this country are over fifty percent of the workforce. I certainly think that given the growth of the industry, given the depth and breadth of the industry, given the fact that it is so interesting so complex and women are becoming more and more involved in the work world, this is a terrific industry for women to get into. I couldn't think of a better one.

Whether male or female, one thing that remains constant is the dedication of the people who work in security.

"Most of us work pretty hard. I have spent the better part of my career working 60 and 70-hour weeks. You can't do that unless you really enjoy it and feel some sense of accomplishment and purpose. And what's beautiful about this industry is that you really feel the latter part of those things, accomplishment and purpose, in ways that other people cannot understand or imagine," says Michelman.

Laura Cerar, president, Pinkerton Security Services, in a presentation to the August 1, 2000 Forum on Women and Minorities in the Security Profession, said the number of women entering the security business is increasing.

Helen is the Assistant Editor of SECURITY magazine. She can be reached at 630-694-4383.
Subscribe For Free!
More Videos