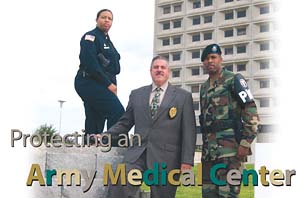 The Dwight D. Eisenhower Army Medical Center is a major player in the fight against terrorism. The medical center cares for hundreds of returning soldiers from the battlefield. Brig. Gen. Eric Schoomaker, commander of the Southeast Region Medical Command and the medical center, not only wanted to provide the best medical attention to these soldiers as possible, but provide them and every patient, visitor and staff the safest and most secure environment.

“With this as a primary mindset the hospital undertook an aggressive program to modernize the medical center’s aging security systems,” said Robert D. O’Brien, CHPA, CPS, chief of security operations for the medical center and provost marshal, Southeast Region Medical Command. O’Brien is a 22-year retired veteran of the Army Military Police Regiment and was hired shortly after September 2001.

With advanced and sophisticated surveillance technology, the medical center security force is able to watch more area and point targets than with the use of mobile and walking patrols.

Having a clear view of the commander’s intent, O’Brien proceeded rapidly, using the Army Medical Command Provost Marshal Office and Brook Army Medical Center, both located at Fort Sam Houston, as a kind of center for lessons learned during the planning phase of securing a large medical center.

“I wanted to do it right the first time; some Army medical centers had already begun a security modernization process. It made sense to learn what went right and what went wrong first,” said O’Brien. One lesson that O’Brien learned was that security in a medical facility had to be balanced very carefully with its medical mission.

“This is not Fort Knox, where security is the main mission. Administering healthcare is the primary mission, but we live right along side of the medical mission in one of the most important supporting roles,” said O’Brien.

“Safety and security of our patients, visitors and staff has always been my department’s focus, but our mission took on so much more when the soldiers from the front lines needing medical attention care came to us,” said O’Brien. “Every vulnerability, no matter how small, was identified and immediately addressed.” 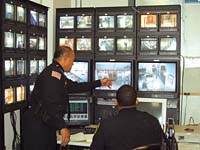 Two medical center security officers observe the access control system as it locks down some doors. Security video is a key component of the integrated protection strategy at the Eisenhower Army Medical Center.

He then began the task of replacing and expanding all existing security technologies. A first consideration was to install a new access control system, then move to updating the security video system. The security department hired Tech Systems of Duluth, Ga., as integrator.

Working closely with Tech Systems, O’Brien decided to use the combination of Pelco (Clovis, Calif.) and Panasonic (Secaucus, N.J.) video security products to replace the old video and access control systems. Selecting the right products to provide the highest standards of performance required for the medical center became a top priority.

Pelco Spectra SE III day/night 23X cameras were selected to monitor the grounds and parking lots of the hospital. Using a combination of Pelco Spectra and Panasonic SDI color cameras for the interior of the building gave the security department superior quality video and capabilities that the old system could not begin to match. In the dispatch center they used the combination of 9- and 21-inch Pelco color monitors. The Panasonic Spectra III day/night cameras gave the security force unparallel video surveillance capabilities, according to O’Brien.

“Our monitor bank was set up in such a manner that the dispatcher had a remarkable view of the many of the activities in the hospital,” said O’Brien.

Lt. Fernando Coral, a shift leader, colorfully described the equipment: “It felt like I have the eyes of an angel, allowing me to see through the darkness.”

The capabilities of the Spectra camera system had given the security forces a powerful tool. Security officers are now able to peer through the darkness and see any potential threat or suspicious activity. Using video motion detection in sensitive areas gave dispatchers the ability to monitor many areas without concentrating on just the sensitive areas; the video motion detector has an audible notification feature that signals the dispatcher when there is movement in the area, such as movement close to a door or sensitive piece of equipment.

The security video system adds a new dimension to the identification and bag inspections program. According to O’Brien, it has many times proven itself a useful tool when complaints are brought forward concerning the inspection of items being brought into the facility.

“Usually it comes down to he said, she said. It’s nice to have the ability to play the video and see where the truth lays. The advance security video system we now have has solved many issues; especially those hit and run traffic accidents that occur frequently in our parking lots,” said O’Brien.

“The issue of access control in a healthcare environment is tricky at best,” observed O’Brien. “The balance between security and the medical staff’s need for ease of movement had to be carefully worked out. The last thing we need is for a door to be locked down when a medical emergency requires swift passage though that set of doors. You could contribute to a death or loss of limb if you don’t plan well.”

IDenticard Inc. of Lancaster, Pa., was selected to provide photo imaging and access control technologies for the medical center. Managed by the IDenticard software, IVIS Plus 2000, the system has proven to be very efficient in securing all of the access controlled doors during different times throughout the day. A new medical center security identification badge was developed using a 26-bit HID (Irvine, Calif.) thin line proximity reader. This allows the security dispatcher to view the badge photo of the person requesting to enter and match it to the images seen using the camera displays. The security department is able to monitor entry requests from all perimeter doors using the IVIS Plus 200 software. The monitoring screen allows the medical center to record the date and time of entry and the photo of the person who successfully swiped through the doorway. This information has been used numerous times during criminal investigations.