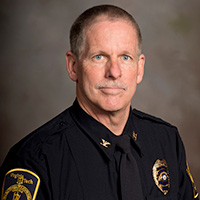 Kevin L. Foust joined the Virginia Tech Police Department in 2011 as the deputy chief of police and assistant director of security after a 24-year career with the FBI. As deputy chief and assistant director of security, Foust managed security operations for the university’s facilities across Virginia and overseas. In addition, he led the police department’s administrative division, which included communications, community outreach, security, and the Safe Ride program. In August 2014 he was named Chief of Police and Director of Security. Foust began his career at the FBI in 1987. He served in several capacities including unit chief of the Usama Bin Laden Unit in the Counter-terrorism Division. He was the supervisory senior resident agent for Southwest Virginia prior to joining the university. Foust received two bachelor’s degrees from Grove City College. Foust was appointed to the Governor-elect of Virginia’s Policy Council for Public Safety and is current President of the Virginia Association of Campus Law Enforcement Administrators. Has been a guest instructor at the FBI Academy, the International Law Enforcement Training Academy in Budapest, Hungary, and the Shenandoah Police Training Academy, Staunton, Virginia.