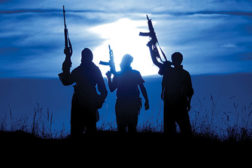 The Syrian civil war has resulted in the deaths of 150,000 people, more than 500,000 injured and millions displaced internally and outside Syria.
Dean C. Alexander

Three U.S. naturalized citizens of Somali descent undertook suicide bombings in Somali on behalf of the Somali terror group al Shabaab. The concern is that U.S.-based individuals would fight in Syria, return to the United States, and participate in a terror attack on U.S. soil.