The Community Value of Surveillance

For a local community bank, making a significant investment in security technology can pay off for employees, customers, neighbors and the bottom line.

In 2016, retail banks in the U.S. experienced 4,251 robberies, an increase of 3.8 percent since 2015, according to the FBI’s Bank Crime Statistics report. In the 2016 robberies, while 4,210 of the facilities maintained surveillance cameras, the systems functioned in only 3,887 of them. As brick and mortar bank crime continues to grow, local banks aim to improve their security technology’s capabilities and reliability to address risk and support the community.

National Bank of Commerce serves the communities of the Twin Ports communities of northwest Wisconsin and northeast Minnesota, with six branches and one operations center. It has been a pillar of the community for more than 80 years. With some recent security updates, the bank is seeking to support community members and law enforcement partners as a better, more forward-thinking partner.

“As a community bank, we’re often the late-majority adopters to technology, and we wanted to change that internally in the products and services we give our customers,” says Troy Lambert, Vice President and eServices Director, National Bank of Commerce. “We wanted to be early adopters.” And that applies to security technology and services as well; National Bank of Commerce worked with Verint solutions to improve surveillance coverage and monitor ATMs with analytics (which could flag an alert if someone stands at an ATM and uses multiple cards to withdraw large amounts of cash, for example).

“Those types of technologies aren’t yet common in our area among other institutions, but we know that the fraud trends are out there, with people producing fraudulent cards or stealing cards and doing ATM cash-outs,” Lambert says. 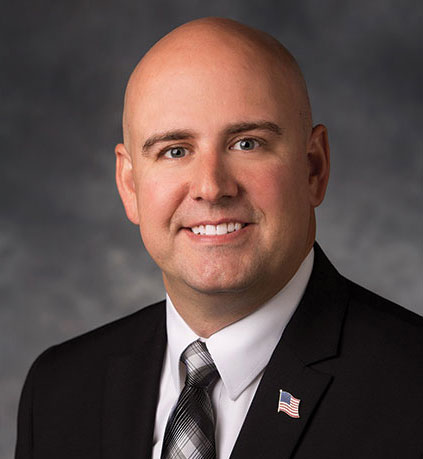 “People walking into a bank to rob it are not the same bank robbers who were in the world 30 years ago,” says Troy Lambert, Vice President and eServices Director, National Bank of Commerce. Adding an enhanced and updated video surveillance system with analytics helps Lambert and his team remain aware of potential risks throughout the bank’s six branches while proactively monitoring crime and fraud trends. Photo courtesy of Troy Lambert

Fraud trends are continuously evolving, and attempted attacks against bank deposit accounts reached $19.1 billion in 2016, up from $12.9 billion in 2014, according to the 2017 American Bankers Association Deposit Account Fraud Survey Report. Debit card fraud accounted for $1.3 billion of losses for the banking industry in 2016, and counterfeit cards remain the leading type of debit card fraud, but check fraud is increasing, especially as chip card technology catches on in the U.S. Having analytics geared specifically to detect suspicious behavior related to these fraud attempts can help Lambert and his team proactively respond to threats.

Previously, the bank’s branches relied on analog video, with multiple third-party systems in place. There was little consistency – in quality, frame rate, angles or reliability – between branches and systems. If an incident happened, security might have an image of the person entering the building but not leaving it, or a clear facial image wasn’t available, leaving law enforcement and security to piece together what was available.

Working with Verint and integration firm Security Products Company, a division of Convergint Technologies, Lambert deployed around 300 IP cameras throughout all of the branches and implemented a Verint EdgeVMS. Security personnel can view live and recorded video from their desktops. Cameras – including some with 360-degree views – provide redundant coverage throughout the banks and even down the street to see potential risks approaching and to expand the perimeter of awareness.

Over the past 12 years, National Bank of Commerce has experienced six robberies, and the monetary cost is only one factor Lambert had to consider; creating a secure environment for customers and employees was essential.

“People who are coming to work at National Bank of Commerce want to feel a sense of security,” he says. “People walking into a bank to rob it are not the same bank robbers who were in the world 30 years ago. Typically they are individuals who are on some sort of drug dependency; they are looking for money for that quick fix; they might have some sort of mental issues… (with the new system) employees know that somebody’s not going to be able to get away with it. That’s huge.”

A major part of that is being able to provide useful evidence to law enforcement. Previously, Lambert would have had to search for one or two decent images from the analog system to provide to law enforcement, he now has a wide supply of video sources to choose from and share. Another benefit from having a single platform is consistency and consolidated software, both for the bank and its law enforcement partners.

After the new system was installed in 2017, Lambert invited representatives from local law enforcement agencies to his office to walk through and review camera placements, types of coverage and where the bank uses either hidden or overt cameras. He demonstrated the bank’s response to alarms or analytic alerts, which activate when someone enters a restricted area. And then, he reminds them that this is a resource open to law enforcement.

“It’s funny how quickly word spread throughout the community and throughout law enforcement agencies that we have a serious system over at National Bank of Commerce,” says Lambert. “It’s not something we’ve advertised; it’s just one of those subtle things that we can use to help our community.”

That was a major selling point for the bank’s Board of Directors. The board members – local business owners and experts – want the bank to be profitable, but they also value the safety of employees, customers and the community, according to Lambert. While he was very upfront with the significant investment this system would require, the Board was able to see the value in improving the security of our community.

“We just passed the one-year mark since we implemented the system, and it has paid dividends for us in so many ways. We were able to provide closure on different crimes, not only for us but for surrounding businesses. We were able to provide surveillance footage of traffic accidents and hit-and-runs to our law enforcement. Before our system was in place, these incidents could have potentially been unsolvable,” Lambert adds. “The fact that we can be an asset to the community, that we can be valuable, speaks to who we are.”

The surveillance system brought some unexpected benefits as well; Lambert found that the system can help to resolve customers’ queries over whether they received the correct bills at the teller window. The IP cameras can read information off checks and serial numbers on dollar bills, and security personnel can use those views to resolve or disprove any discrepancy, which has proven helpful for bank employees and customers.

Moving forward, Lambert is interested in adding license plate recognition technology. This would be of value if someone is trying to conduct fraudulent activity. Security personnel can review the license plate number and relay that information on to other locations to provide warning and be more proactive in the bank’s fraud prevention efforts.

The Most Influential People in Security 2018

Claire Meyer is a former Managing Editor for Security magazine.

Certifiably Obstinate: The Hidden Value of the Less Experienced

The Purpose of Innovation: A Focus on Industry-Wide Solutions at Axis Communications Partner Event

How a Security Breach Can Impact the Value of Your Brand

The Value of a Unified Approach to Critical Event Management

From extreme weather to cyberattacks to workplace violence, every organization will experience at least one, if not multiple, critical events per year. And in today’s interconnected digital and physical world, the cascading safety, brand, and revenue impacts of critical events are more severe. Organizations need to be prepared through a unified and rapid response to these events.

MetLife Stadium is home of the New York Jets and New York Football Giants, in addition to numerous entertainment events and concerts each year.
View All Submit An Event